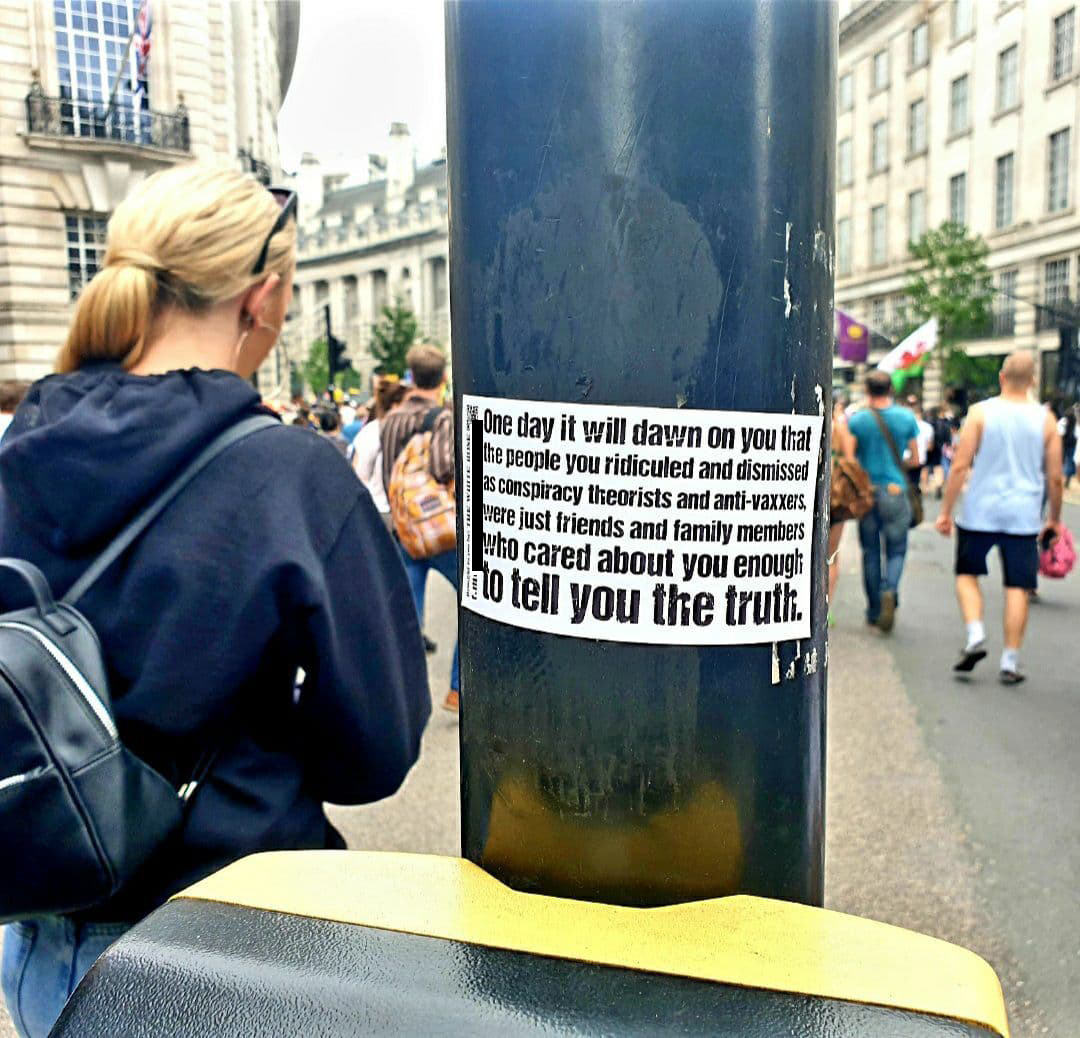 Sitting outside my local coffee shop in Hackney, east London, last week I saw about 15 mainly young people walking around the streets, carrying antivaxx placards and handing out leaflets to the public.

As they walked along the road they ripped down public health notice boards, posted up antivaxx stickers and abused anyone who argued with them.

Praising god, playing a guitar and singing Christian songs, they stood outside a secondary school, leafleting the school students. When school staff moved them on they went to leaflet a nearby primary school instead.

That day at least three antivaxx groups were wandering around Hackney. They were out again this week on Monday 13 September, leafleting the popular Ridley Road street market and other schools.

When I asked them what organisation they belonged to they claimed they were just “concerned citizens”. But their stickers and placards promote a group named White Rose. 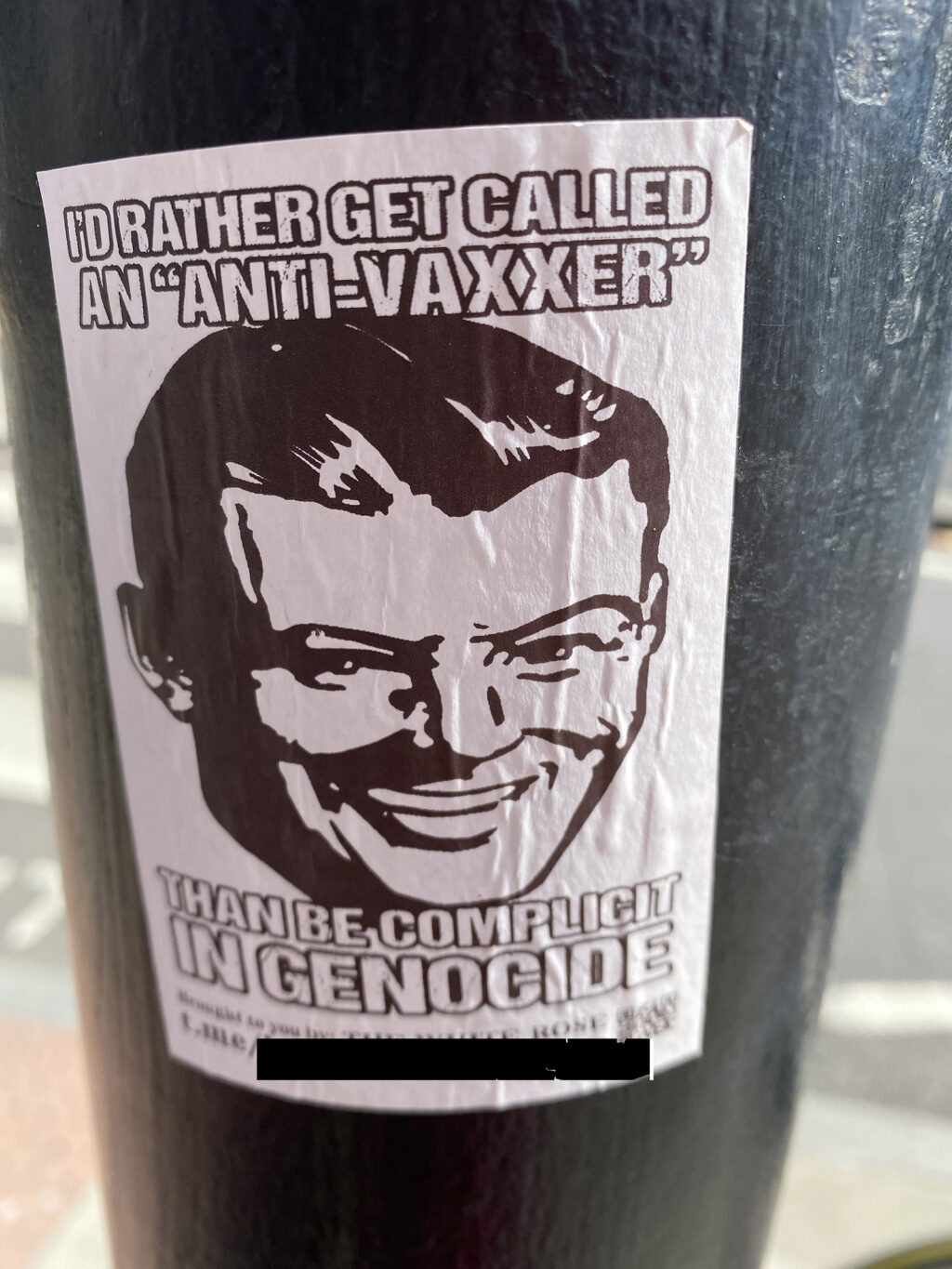 [UPDATE 15 September: Since this article was published, we have received reports of this group attempting to leaflet at schools in three other London boroughs – Tower Hamlets, Haringey and Redbridge. This suggests a concerted and organised attempt to target school students.]

The White Rose antivaxx group is a sinister and secretive group that promotes itself on the Telegram and MeWe social media platforms.

Over the past few years Telegram has become a key platform for far right and fascist groups and conspiracy theorists locked out of Facebook and Twitter. It was the platform former US president Donald Trump used after he was banned from the mainstream sites after the storming of the Capitol building in Washington DC in January this year.

A QR code allows entry into the antivaxx group’s site and discussion groups. Appallingly, the antivaxx site greets visitors with an image of Sophie Scholl.

Sophie Scholl was a member of a group of young people in Germany who bravely organised resistance to Hitler’s Nazis through actions such as leafleting. The group was called White Rose. This sort of resistance was extremely dangerous: Sophie was captured and executed by the Nazis in 1943, aged just 21.

Under a heading, “Why the name?” the antivaxxers’ website states:

Our name is an homage to the WW2-era underground resistance group—active within Nazi Germany—who at great personal peril published and distributed a series of leaflets calling for active opposition to the Nazi regime. The courage, wisdom and ultimate sacrifice of Sophie and Hans Scholl, and all of their brave student allies, continues to inform and inspire us nearly 80 years later.

Disgracefully, this secretive group is using the heroic legacy of Sophie Scholl and the White Rose group to promote its antivaxx message. 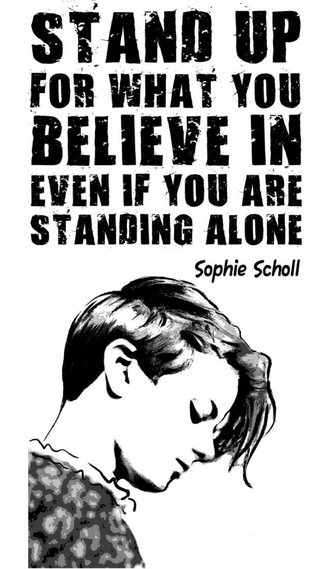 Antivaxxers using an image of executed anti-Nazi Sophie Scholl to promote their campaign on their website.

The use of anti-Nazi imagery by the antivaxx movement is not confined to the White Rose group.

On recent antivaxx protests we have seen individuals carrying placards comparing the Covid 19 vaccine to Zyklon B, the poisonous gas used in the Nazi death camps, and some protestors have even worn yellow stars – comparing the public health restrictions caused by the Covid pandemic to the restrictions imposed on Jews under the Nazis.

As we have discussed previously, minimising the horrors of the Nazi regime and the death camps in this way opens the door to other forms of Holocaust denial and the foul politics that goes with them.

The antivaxx White Rose Telegram channel has over 41,000 subscribers and has published photos of its actions across the globe. It has no centralised leadership or hierarchical chain of command. It claims:

Each White Rose participant is an independent free agent… entirely responsible for his or her own actions. We do not exist as any kind of tangible organisation, but rather as an idea; a concept; a methodology.

This group has members in Britain, across Europe, the US and Australia. The Telegram site enables different members to link up with other antivaxx groups, exchange antivaxx theories and resources. It also enables members to download templates of over 50 different sticker designs in various languages.

As we have noted here previously:

This decentralised syndication model has allowed a disparate bunch of conspiracists from around the world to co-ordinate their efforts for maximum international impact. 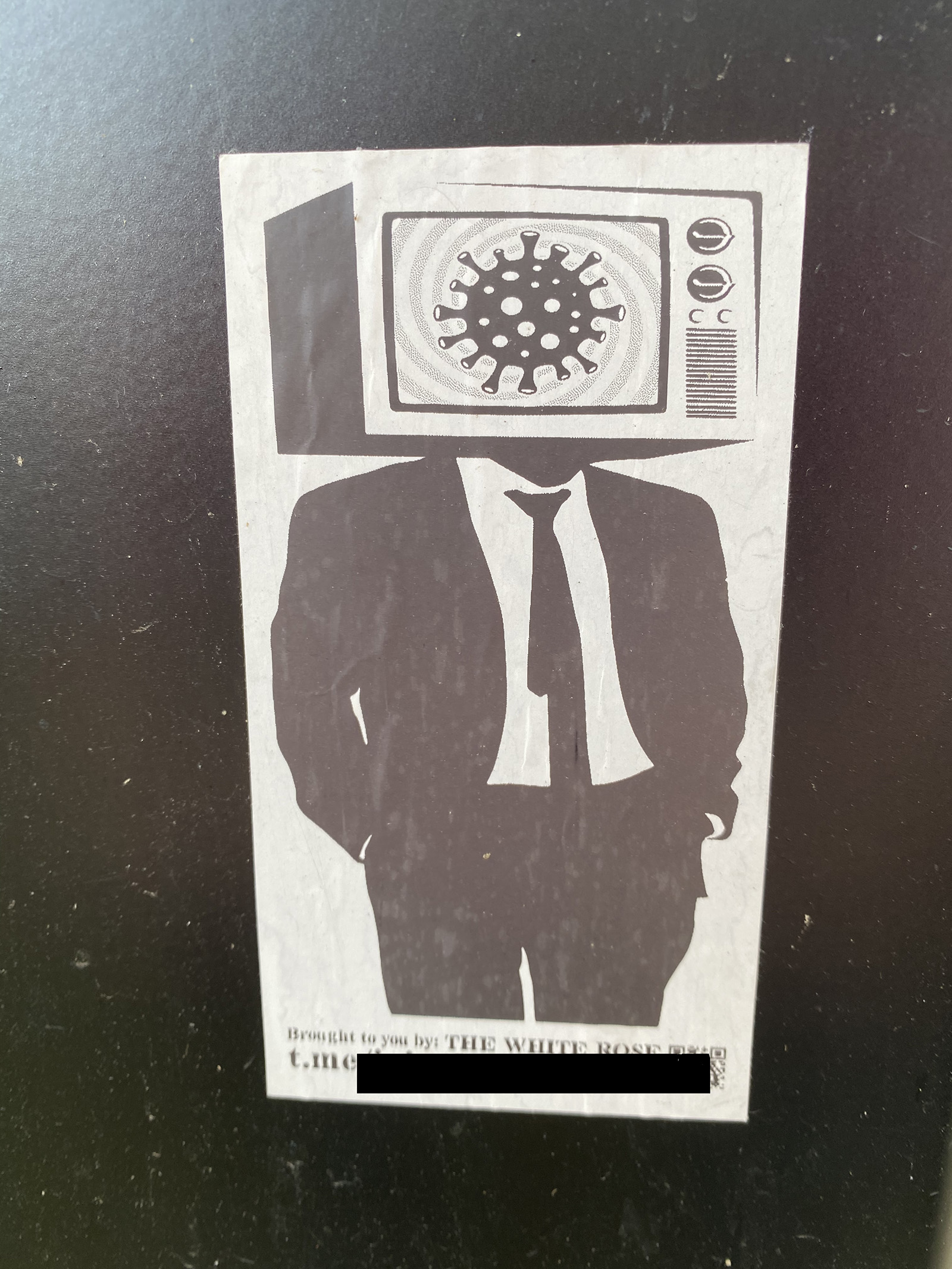 But the White Rose channel does not just provide campaigning materials for antivaxxers. Its messageboards are a gateway into the murky world of conspiracy theories and far right propaganda. The site is also supported by a number of evangelical Christian groups.

The site’s chat room is a place where individuals promote anti-LGBT+ views and opposition to abortion. Other discussions promote antisemitic tropes about global elites and Jewish power.

As the White Rose and other antivaxx and conspiracy theorist groups harden up their supporters, so the actions they participate in become more extreme.

Now we are seeing groups target school children – as in Hackney – while Transport for London staff have been warned that anti-mask and antivaxx posters have been discovered with razor blades hidden under them.

The White Rose antivaxx group is just one of a number of autonomous far right groups moving out of their secretive chat rooms and onto the streets. 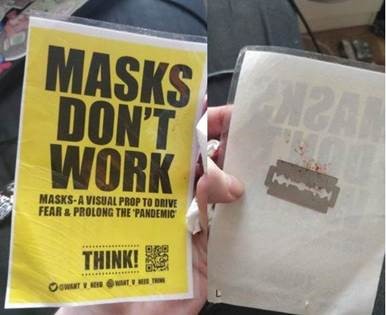 The NHS published this image showing an antivaxx poster with a razor hidden beneath.