Out and proud, this afternoon thousands of people protested outside the Georgian Parliament in Tbilisi. Their demands were simple: “We are united against the homophobia and violence of the state, church and the far right.”

The crowds cheered when one of the organisers of the protest announced:

The government has until 12 noon tomorrow to resign and for fresh elections to be called. If you not comply, we will inform you of our action plan, which will lead to the removal of Gharibashvili [Georgian prime minister] and his government.

Events are moving fast. Within hours of the announcement of the tragic death of the TV cameraman Aleksandre (Lekso) Lashkarava, groups of LGBT+ activists across the country daubed Government offices and churches in red paint. Reports are coming through that in the Georgian cities of Tbilisi, Batumi and Rustavi, groups of LGBT+ activists involved in the daubing of buildings have clashed with police.

There is now a growing demand for a national march in support of Georgia’s LGBT+ community next week.

The events over the last week could be a turning point for the fight against homophobia in Georgia and other Central and Eastern European countries. 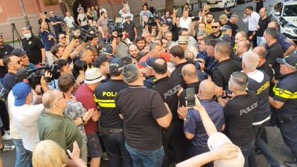 TV cameraman Aleksandre (Lekso) Lashkarava, who was violently assaulted by far right thugs outside the headquarters of Tbilisi Pride (see report below), was found dead in his home last night by his mother with blood coming out of his nose.

While the cause of his death is unknown, his colleague and fellow TV Pirveli journalist Miranda Baghaturia says:

When they broke into the office, they kicked me first. Then the priest began to pull my hair, while saying: “Maybe now you will shut up?” Our cameraman Lekso tried to stop him and told him: “What are you doing, we are journalists!” And then about twenty radicals attacked him.

Lekso and I were completely defenseless there. There was only one policeman and he could not help us. Lekso was beaten mercilessly by the crowd, he was in a pool of blood. I screamed and cried and begged: “Don’t kill us!” They also started beating and kicking me.

At first, I could hear his voice, and then he fell silent, and I thought: “That’s it, they killed him.

Lashkarava was taken to hospital and underwent surgery, was diagnosed with a concussion and had broken facial bones and was discharged.

The Tbilisi LGBT+ community has responded to this tragedy by calling an emergency protest later today. Dream Deferred will be posting reports from the protest.

Organisations such as Amnesty International and LGBT+ groups rightly blame the Georgian government and Church for encouraging this violence. Activists have been daubing government buildings and churches with red paint. 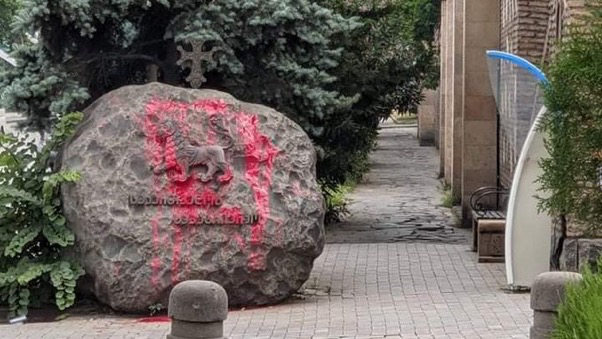 A church daubed with red paint in protest at its role in the attack on the Tbilisi LGBT+ HQ. 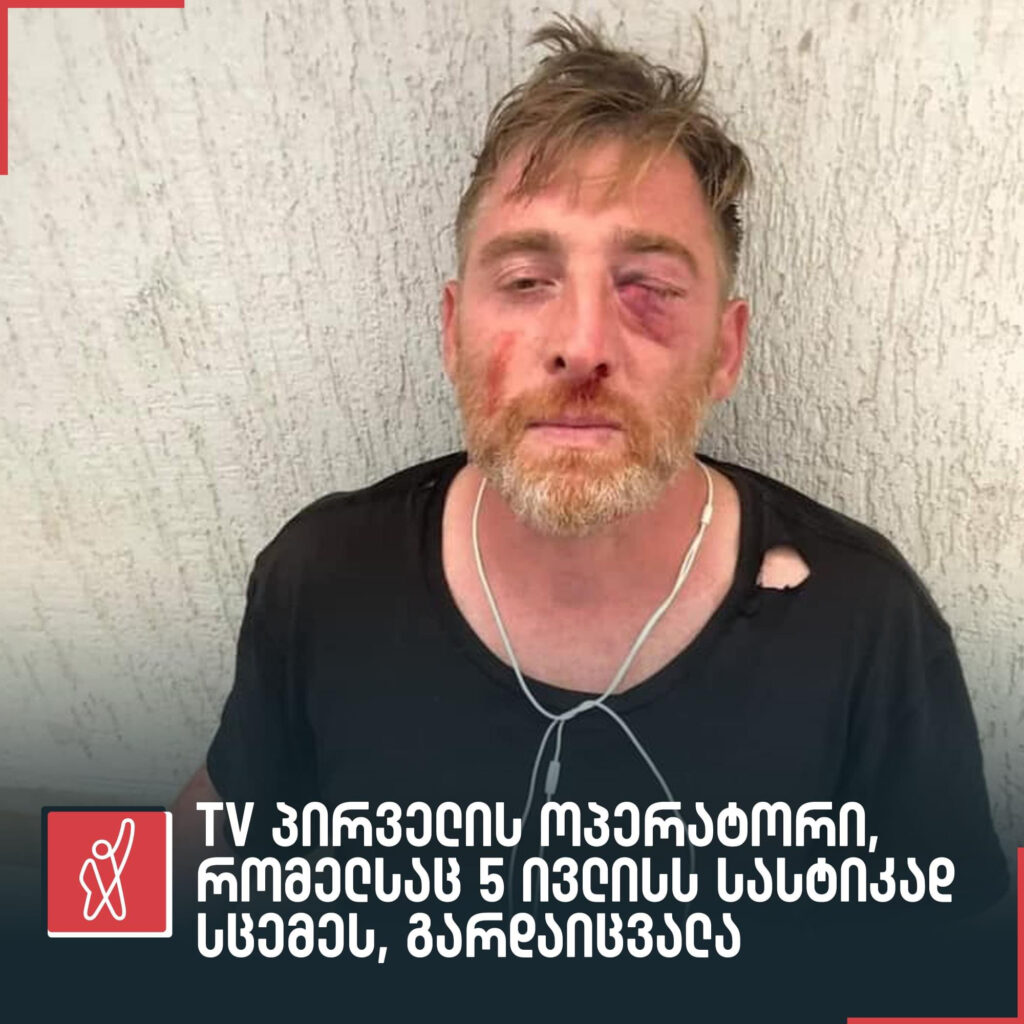 Hundreds of far right thugs led by priests attacked the headquarters of Tbilisi Pride in the capital of Georgia on 5 July ahead of a planned Pride march.

The assault on the Pride offices was the latest in a long series of homophobic attacks on people and organisations in Georgia – but it was followed by a wonderful show of resistance and solidarity the LGBT+ community on 6 July.

We do not usually post videos from Radio Free Europe – a US government funded channel – but the incidents in this video (above) have been corroborated by other media organisations inside and outside Georgia. This video shows far right thugs assaulting campaigners and journalists (the Prosecutors Office acknowledges that 35 people were hurt) outside the Tbilisi Pride HQ.

Then to huge cheers a group of thugs climb onto the balcony of the office, rip down a rainbow banner and flag and replace them with the Georgian national flag. The group is then seen entering the office and, out of view, smashing it up.

If that wasn’t shocking enough, the protesters march to a nearby church, where a priest gives a short sermon followed by mass prayers. A wooden Georgian cross (Grapevine cross or Saint Nino’s cross) is then erected. The cross is a major symbol of the Georgian Orthodox Church.

Footage posted by Tbilisi Pride director Giorgio Tabagari on Twitter shows the attack on the Pride offices from a different viewpoint.

❗️Footage of hate groups attacking our office.. horrific and no police presence..

❓Where was the state today?! Where were governance and democracy?! Absolute failure of state institutions! #Georgia #TbilisiPride21 #TbilisiPride2021 pic.twitter.com/9ctysIEoIb

Some of the homophobic attackers carried posters of Viktor Orbán, the notoriously anti-LGBT+ president of Hungary, while others wore wore “Gay Bad” t-shirts.

The organisers of the Pride march say the attack was supported by a number of “neo-nazi and ultranationalist sects”. One of the Pride organisers described the assault as a “sanctioned pogrom against the LGBT+ community”.

Homophobia is a central plank of the far right political agenda across the region, which we have analysed in detail previously. We looked at how far right governments, fascist and far right street fighting groups and the churches in central and eastern Europe have come together against what they call “LGBT ideology”.

The recent events in Georgia are part of this phenomenon.

The leader of the Georgian Orthodox Church condemned Tbilisi Pride as an attempt “to legalise grave sin”. Archpriest Tskipurishvili went even further stating:

On 5th [July] at Rustaveli Avenue, we have to break the supporters of sodomy. We have to tear them to pieces, shatter them…in case they use arms against us, their spines will be broken…they will be shattered and it will be inevitable.

The church encouraged its supporters to attend the protest and one priest speaking at the event encouraged the attack, claiming it was done “for the sake of the homeland”.

In the aftermath of the attack Georgian prime minister Irakli Garibashvili, of the supposedly centre-left Georgian Dream party, blamed the outbreak of violence on the LGBT+ community, saying it was “unreasonable” for them to stage a Pride march and it could lead to a “civil confrontation”.

Garibashvili, whose government is formally committed to aligning with the EU, also used the Pride march as part of his strategy of maintaining alliances with ultraconservative and anti-EU groups, claiming that it was organised by the pro-European exiled former president Mikhail Saakashvili’s United National Movement.

The prime minister’s readiness to scapegoat the LGBT+ community comes against the background of a political crisis that has wracked Georgia since October last year, when opposition politicians claimed the country’s parliamentary elections had been rigged.

In the aftermath of the attack the organisers cancelled the Pride march.

Tbilisi Pride’s four-day festival in July was launched with a film screening, which was also attacked by an ultranationalist mob of thugs who threw stones and eggs at those attending. The police refused to protect the event, which was attended by diplomats and local civil group leaders.

The attacks are only the latest assaults on the LGBT+ community’s attempts to hold Pride events in Georgia. In 2013 priests led a far right mob chanting “No to gays” breaking up the Tbilisi Pride. The organisers had to go into hiding and for the following six years Pride was held in secret venues.

Fascist street groups such as Georgian March have sought to build support through regular attacks on the LGBT+ community.

But on 6 July, a wave of public anger at the homophobic attack on Tbilisi Pride brought thousands of LGBT+ people and their supporters onto the streets in front of the parliament building, in a brilliant show of unity and defiance.

Approximately 5K people gathered at the parliament to let the world know that #Georgia is not a country of aggressors, it is a country of free, peaceful, diverse people. #TbilisiPride21 pic.twitter.com/E4sryHe04X

❗This anthem, flag and country itself belong to us too! and we are not gonna give up on any of it!

✊#TbilisiPride21 is now over and can't express how happy I am now. We made it! pic.twitter.com/SLroxA1Q4A

This demonstration in support of Pride and the LGBT+ community is a sign of hope for the future, in Georgia and elsewhere in central and eastern Europe where the far right is targeting LGBT+ people.

Tbilisi Pride is asking for donations to help pay for the damage to its office and provide safe transport for its workers. Please send messages of support by email to Tbilisi Pride and donations via PayPal (click “Send” to donate). 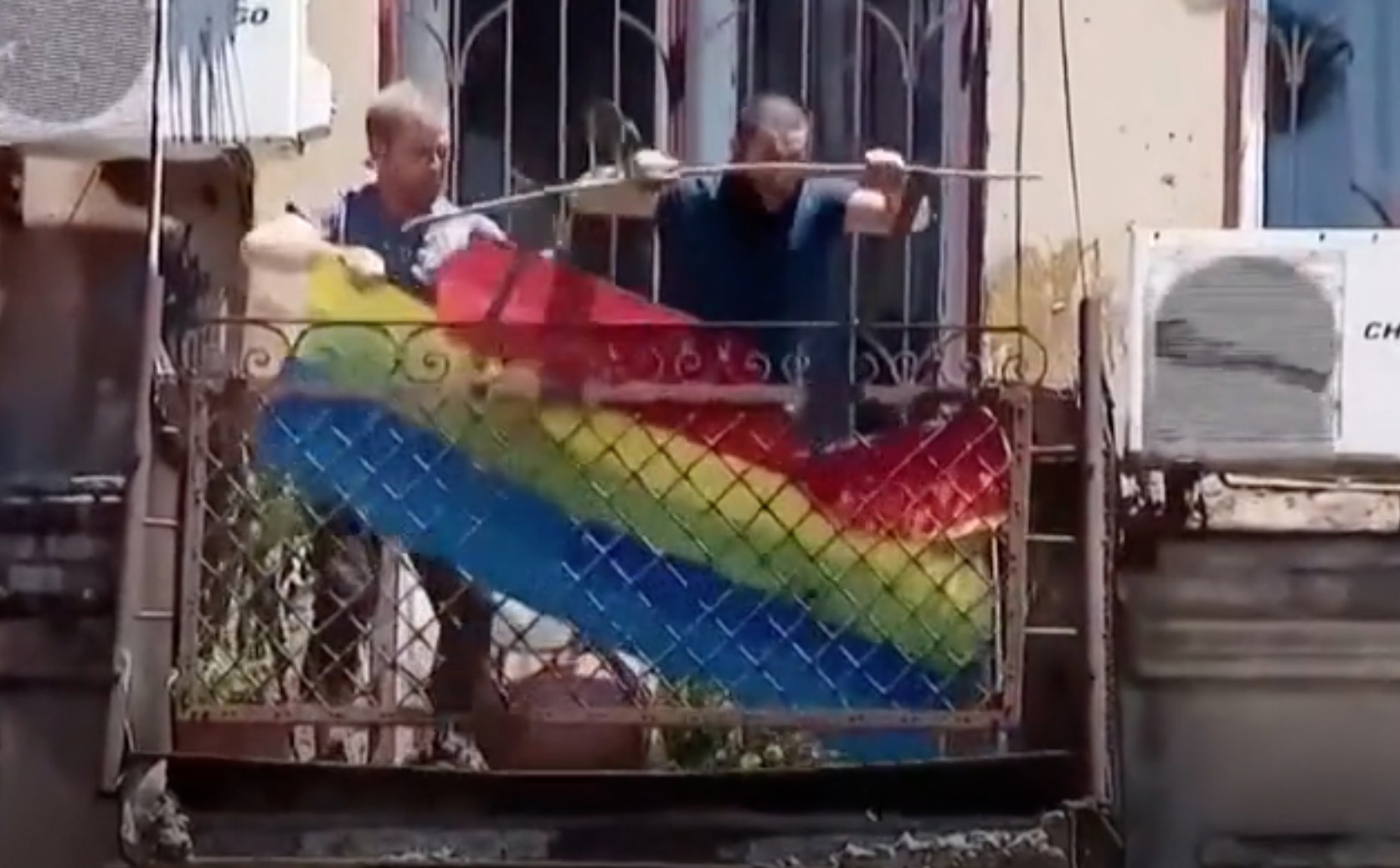