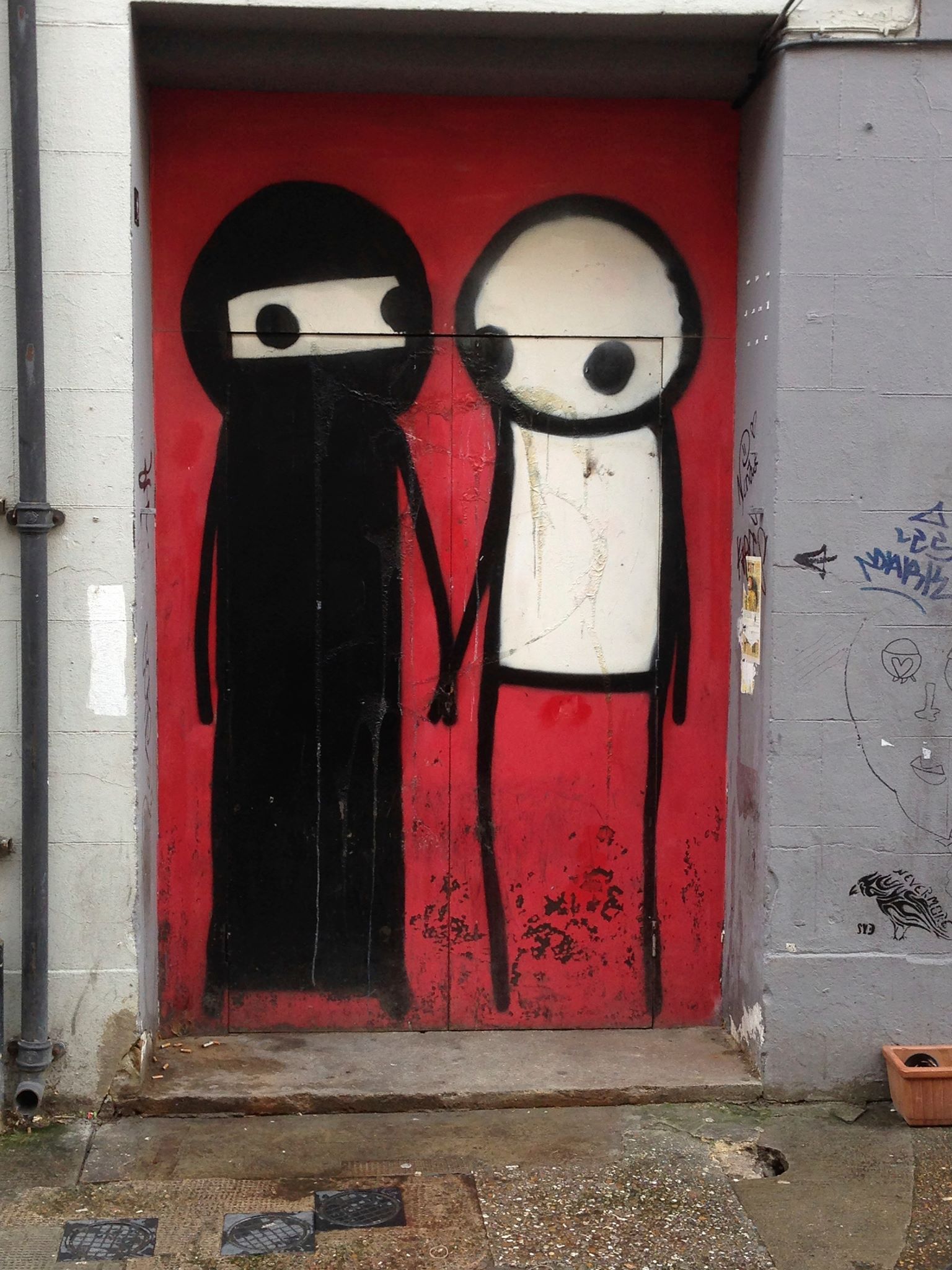 A beautiful mural by street artist Stik, in London, shows respect for women who wear a niqab or veil, in a riposte to the racists. Pic credit: Martin Smith

Voters in Switzerland have narrowly backed a ban on the niqab or face veil in a referendum proposed by the far right. It’s a grim piece of news on International Women’s Day.

The Islamophobic nature of the proposal is especially apparent at a time when the coronavirus crisis means facemasks are mandatory in Switzerland across a huge range of outdoor and indoor public spaces.

It follows a series of so-called “burqa bans” and similar restrictions enacted in other countries, including France, Belgium, Austria and Denmark.

The ban was voted through by the slimmest of margins, with 51.2% in favour and 48.8% against. The close result shows that voters’ support shifted away from the racist move in the final weeks before the referendum.

An opinion poll of 15,000 voters carried out in February by the Tamedia organisation found that around 63% of voters had either decided or thought they were likely to vote to vote Yes to the ban.

The referendum proposal decided by Swiss voters on 7 March bans face coverings – except for medical or safety reasons including anti-Covid facemasks, face coverings related to “climatic conditions” such as scarves in bad weather, or coverings worn for reasons of “local customs”.

It is transparently ludicrous. You can – and, in many cases, MUST – wear something covering your face in public unless you happen to be one of the few Muslim women who chooses to wear a niqab. Then it is a banned face covering, quite different from those other things that cover your face.

The proposal is aimed at demonising Muslims, who make up around 5% of Switzerland’s population – although it is believed that fewer than 100 women in the country actually wear a niqab at present. It is a ban on an item of clothing that almost no one in the country wears and has been proposed purely for its hatemongering political effect.

Meriam Mansour, of the Muslim and non-Muslim women’s organisation Les Foulards Violets (Purple Scarves), said the group was campaigning against the proposal “because of its deeply racist and sexist character”. She explains:

Sexist, because on the one hand, we want to control women’s bodies and, on the other, we deny their capacity for self-determination. Racist, because it is stigmatising against Muslims in Switzerland.

Switzerland has regular referendums under its system of “direct democracy”, including proposals like the face veil ban that come from “popular initiatives” – through petitioning – as well as government proposals.

In this case, the “popular initiative” has been launched and promoted by a far right lash-up between the Islamophobic and racist Swiss People’s Party (SVP) and its allies from the Protestant, conservative and nationalist Federal Democratic Union of Switzerland. They launched the campaign through their collective front group, the Egerkinger Komitee.

In typically scaremongering, conspiracy theory style, this committee declares that it “organises resistance against the claims to power of political Islam in Switzerland”. It also says it fights what it claims is “the religiously motivated infiltration of the Swiss rule of law”.

All other major political parties, and the Swiss government, are opposing the face veil ban.

The SVP has built its following on anti-Muslim and anti-immigrant racism. It took the largest share of the vote (25.6%) at the last general election in 2019, despite a dip in support since 2015.

Its earlier initiatives include Switzerland’s notorious ban on minarets, which was enacted after 57.5% of voters backed the move in a 2009 referendum. As with the face covering ban, the idea was to whip up anti-Muslim hate and scaremongering, despite the presence of just four minarets in the entire country.

The SVP also led the campaign for the 2010 referendum “for the expulsion of criminal foreigners”, which won 52.3% of the vote, and the 2014 referendum “against mass immigration”, which narrowly passed with 50.3% in a country where immigrants make up around a quarter of the population.

In 2013, a documentary revealed that Freysinger had decorated his desk space with the Reich War Flag, used in Germany and other countries as a proxy for Hitler’s Nazi flag, which is widely banned.

The SVP’s campaigns often feature striking racist graphics, such as the notorious white sheep kicking out a black sheep motif that has been adopted by fascist and far right parties across Europe. 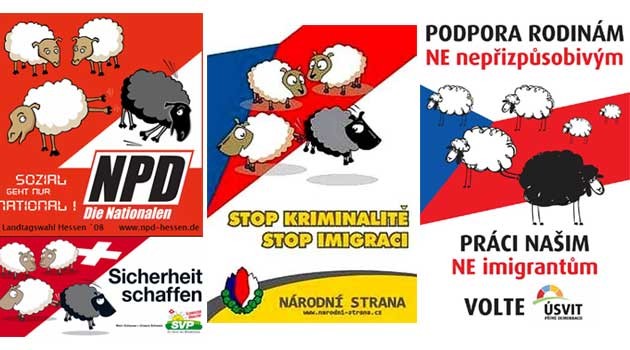 The racist sheep poster launched by the Swiss SVP (bottom left) has been taken up by German, Romanian and Czech fascists. Pic credit: Romea.cz

A campaign poster for the face covering referendum shows a woman wearing a hijab headscarf and niqab with the slogan “Stop extremism”. Other “Yes” campaign propaganda for the referendum seeks to portray Muslims as terrorists.

Antiracists and antifascists are also targeted by the “Yes” campaign, which uses a photo showing people with an antifascist flag under the slogan, “Create security: put an end to masked chaos!”