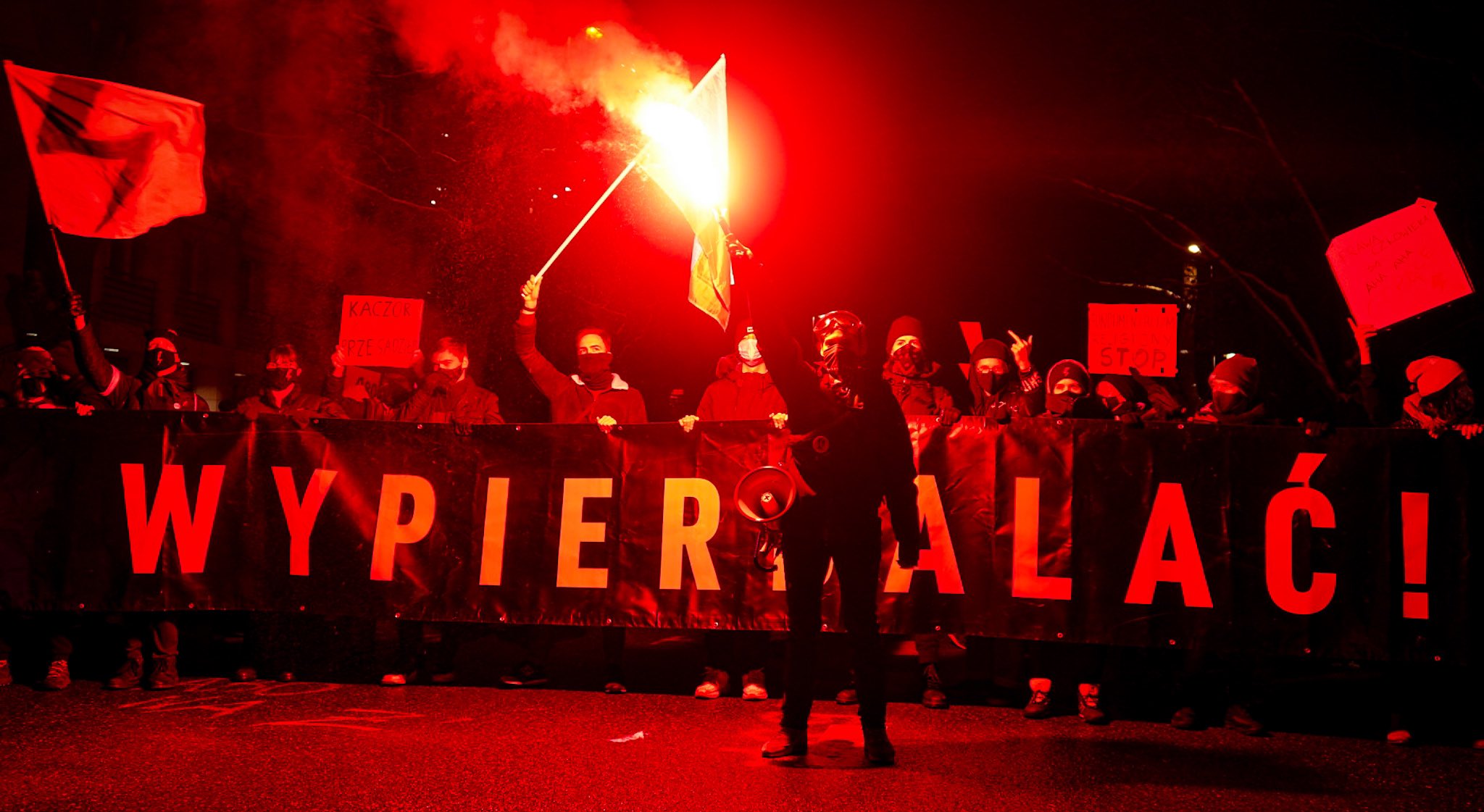 Abortion rights protesters in Warsaw tell the government, “Wypierdalać” – “Get the fuck out!” Pic credit: Artur Jaskulski via twitter

Protests have erupted again onto the streets of Poland in rage at the implementation of an almost total ban on abortion – just months after the far right PiS government was forced to back down on the issue.

On Wednesday 27 January the government removed one of the very limited conditions that allowed for legal abortions, publishing a ruling made by the country’s constitution tribunal last year. Protesters gathered almost immediately in cities, including Warsaw, Wrocław, Poznań and Kraków.

By Thursday evening, abortion rights protestors were marching in more than 40 towns and cities in protest, with more demonstrations planned for Friday, Saturday and Sunday – undeterred by coronavirus restrictions and vicious attacks on marchers by police.

The abortion rights movement in Poland has repeatedly staged the biggest anti-government protests since the fall of the Stalinist regime in 1989.

The protests centre on access to abortion and women’s rights. But they also express wider discontent at Poland’s increasingly authoritarian far right government under president Duda – which models itself on Viktor Orbán’s regime in Hungary – and at the widespread poverty and lack of opportunity that drives large-scale emigration from Poland.

When the abortion rights protests first broke out at the end of last year, demonstrators marched and danced to the slogan “Jebać PIS” – “Fuck PiS”. After the government attacked demonstrators for swearing, some demonstrators produced placards saying, “We politely request you to fuck off.”

This week, for the avoidance of doubt, a large banner fronting the demonstration in Warsaw on Thursday night read, “Wypierdalać!” – “Get the fuck out!”

Poland already has some of the most restrictive abortion laws in the world. But in October last year, the constitutional tribunal ruled that abortions in the case of foetal defects – which make up around 98% of all legal abortions in Poland – were unconstitutional.

The tribunal ruling was a manoeuvre – the body is mainly made up of PiS appointees amid increasing attempts by the party to politicise and manipulate the courts. For the ruling to take effect, however, it had to be officially published by the government.

Hundreds of thousands took to the streets in protest at the end of October as the Strajk Kobiet (“Women’s Strike”) movement spread to towns and cities across the country. By 30 October, it was estimated that 400,000 were on the march.

The scale of the protests shook the PiS government and forced it to back off from turning the tribunal ruling into law.

It was the second time in just a few years that a huge protest movement had defeated the government on abortion rights – the Czarny Protest (“Black Protests”) of 2016 had set the tone, as we reported here.

Now, however, the government is trying again to implement the constitutional tribunal ruling and make abortion almost totally illegal. The immediate prompt this time may be an attempt to divert attention from the growing coronavirus crisis in Poland.

But the repeated attacks on abortion rights come alongside the PiS’s vicious anti-LGBT measures, which include encouraging local authorities to declare their areas “LGBT-free zones” and repeated rhetorical attacks on so-called “LGBT ideology” or “gender ideology”.

In July last year, Duda was re-elected president after a knife-edge vote, taking 51.2% of the vote while his liberal challenger, Rafał Trzaskowski, the mayor of Warsaw, received 48.8%.

Duda’s campaign was built on homophobia, while his supporters – including the state TV channel – also tapped antisemitic themes in the run-up to the vote.

Duda and the PiS government use this bigotry and social conservatism to consolidate their support base and the party leaders are seen as close to the hierarchy of Poland’s powerful Catholic Church.

At the same time, the PiS has been attempting to clamp down on the independence of the courts and media.

To the right of the PiS are Poland’s fascist parties, which have succeeded in taking seats in parliament and have been able to mobilise huge numbers to march on Poland’s independence day each November. We have reported on a number of these demonstrations.

There is a dynamic relationship between Duda, and his PiS government, and the fascists of Ruch Narodowy (now part of the Konfederacja group in parliament), with the RN acting as a ginger group urging Duda and the PiS rightwards, while every shift by the ruling party in turn legitimises and boosts the fascists.

But the scale of support for the abortion rights demos is huge. They have drawn strength from twice defeating the government.

And the issue is a touchstone one for all those who want to fight back against the PiS’s moves towards greater authoritarianism – alongside the lightening flash symbol of the Strajk Kobiet movement, the rainbow LGBT liberation flag can be seen flying too.

The resistance is on the streets.