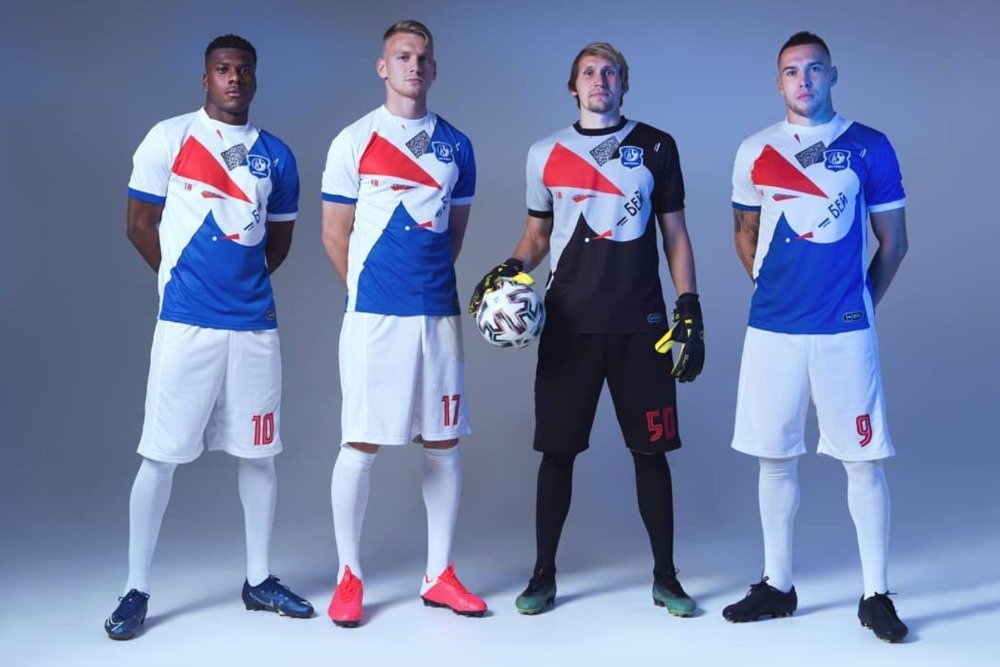 You won’t have missed the huge protests in Belarus against the repressive regime following the country’s rigged presidential election.

Since August, the streets of Belarus have been filled with demos of up to 100,000 people protesting against the brutal regime of Aleksander Lukashenko.

There have also been strikes by groups of workers and protests by school students – all in the face of the violence and brutality of Lukashenko’s state forces, which often operate from unmarked vehicles and wearing balaclavas.

But while you have probably seen footage of the protests, you might have missed these beautiful football kits worn by the players of FC Vitebsk.

They are based on the revolutionary artwork “Beat the Whites with the Red Wedge” by El Lissitzky, who was based as an art teacher in the city’s People’s Art School. His work includes some of the best known examples of the Constructivist school of art that sprang up amid the creative upsurge accompanying the Russian Revolution of 1917.

El Lissitsky produced the famous poster in support of the revolutionary forces fighting off the reactionary White armies in 1919, during Russia’s civil war.

The kit was designed to bring football and art together and to celebrate El Lissitzky’s links with Vitebsk and the art school established in the city under Marc Chagall. Vitebsk was the hometown of Chagall – and much less famously, some of my own family.

The FC Vitebsk footballer and art enthusiast who came up with the idea for the kit, Daniil Chalov, says the design process began several months before the street protests erupted.

It comes from a partnership between FC Vitebsk, the Centre for Belarusian-Jewish Cultural Heritage based in the Belarus capital Minsk, the Vitebsk Museum of the History of the People’s Art School and the Nothing Ordinary clothing firm set up by footballers.

Chalov says he had to choose between the works of El Lissitzky and his fellow radical artist Kazimir Malevich.

But it was El Lissitzky’s dynamic Red Wedge poster that captured his heart.

Chalov notes that the words wedge, red and white from the original poster “were discarded to avoid unnecessary meanings”. He adds, “They are not needed in this context. It turned out to be a reinterpretation. Time changes, meanings change, but art and sports are timeless.”

Art like El Lissitzky’s Red Wedge was produced at a key moment of history – but great art also has a lasting “timeless” quality and maybe the football shirt design will be seen purely as art. It is certainly one of the most beautiful football shirts I’ve ever seen.

In Eastern Europe, the language of socialism and the history of the Russian revolution have been largely rendered meaningless and often worse, corrupted into its opposite by the long, grim legacy of Stalinism. So El Lissitzky’s radical, hopeful message and it’s revolutionary context might not shine through today.

And if the Vitebsk shirt design and its revolutionary origins do bear any relation to today’s protest movement against the repressive regime, no one is saying…

Maybe it’s just a happy coincidence. But meanings do change – and red and white are the colours of the protest movement, although the traditional colour of FC Vitebsk is blue, so maybe Vitebsk fans will have an extra reason to enjoy their beautiful new football shirts.

Let’s hope the football team does well – and more importantly that the Belarus protest movement wins.