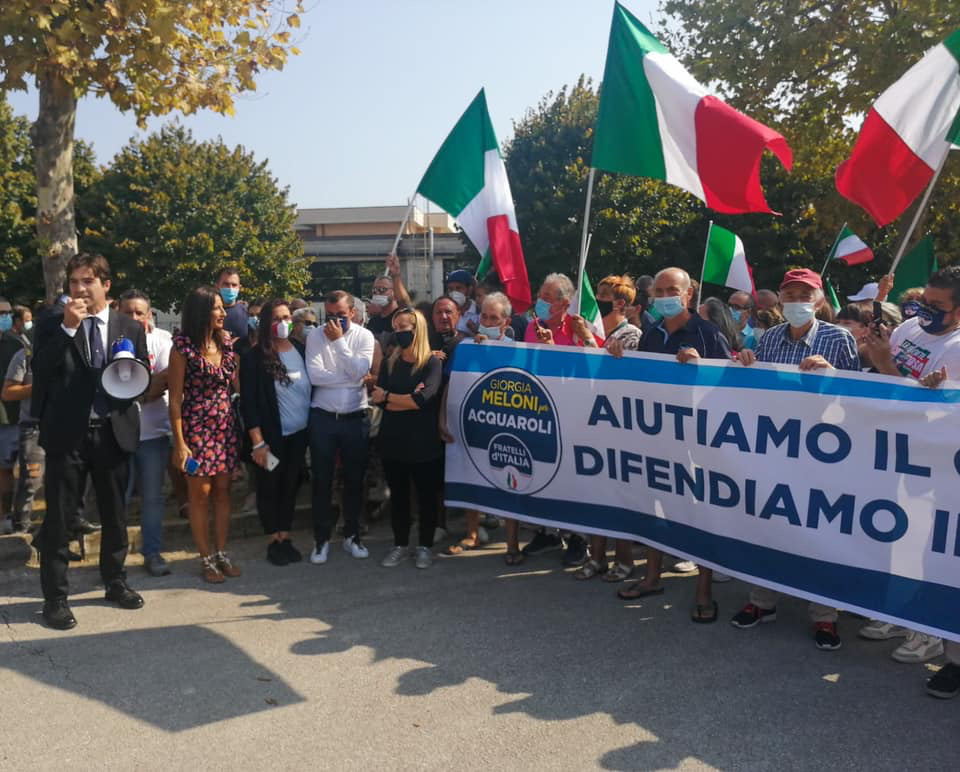 UPDATED 11am, 22 September The fascist Brothers of Italy party has taken control of the Marche regional presidency, ousting the centre left, in Italy’s regional elections, whuch covered seven of its 20 regions.

But the centre left retained two key regions – Tuscany and Puglia – against the far right.

Today’s elections – for regional presidents and governments in six main regions and the much smaller Valle D’Aosta enclave – had been seen as an opportunity for the racist far right Lega party, led by Matteo Salvini, to challenge the centre left-led Italian government and potentially force a new general election.

That bid has failed, although worryingly, the parties of the far right coalition – the Lega, Brothers of Italy (Fratelli d’Italia, FdI) and Silvio Berlusconi’s Forza Italia – have increased their vote in most of the regions that went to the polls this time.

And in Marche, a longstanding leftwing stronghold of Italy’s central “Red Belt”, the candidate of the far right electoral bloc nominated by the FdI, Francesco Acquaroli, has gained control of the regional presidency.

The FdI’s Acquaroli has a long association with fascist politics. He began his political career in 1995, joining the National Alliance (Alleanza Nazionale, AN) – the successor to the fascist MSI party that was formed after the Second World War by members of Mussolini’s original Fascist party.

In October last year Acquaroli attended an FdI dinner held to commemorate the anniversary of Mussolini’s 1922 March on Rome and the advent of the pre-war fascist regime.

With almost all the votes counted, Acquaroli’s far right bloc was on 49.1%, with his centre-left opponent Maurizio Mangialardi on 37.3%.

It marks a new step forward for the FdI, after it took control of the Abruzzo region in the elections of February last year.

The FdI has been on the rise for the past year as supporters of the Lega – whose leader Salvini regularly flirts with fascist symbolism – move rightwards to an organisation with clear and open fascist origins.

The Lega has led the national opinion polls since 2018 when it emerged powerfully placed from the general election, when the far right bloc took 37%, with the Lega pulling in the largest chunk of 17.4%. The FdI was a minor player then, accounting for 4.7%.

Alarmingly, the Lega’s election success came on the back of a clear turn towards fascism.

After the election, the Lega entered government in coalition with populist “anti-establishment” Five Star Movement (M5S) and Salvini became one of the European far right’s most prominent figures as Italy’s interior minister, ramping up vicious racist rhetoric and savage measures against refugees.

In a grim response to Salvini’s hardline stance, the Lega’s popularity soared, and until this time last year it was regularly hitting well over 30% in the polls.

But the Lega lost its place in Italy’s national government when Salvini broke up its coalition with M5S last year, in an attempt to consolidate the Lega’s power. It turned out to be a tactical mistake, allowing the centre-left Democratic Party (PD) to form a new ruling coalition with M5S.

Following the Lega’s exit from government, its popularity declined a little, with its polling percentage figures now in the mid-20s .

But this did not mark a shift to the left in popular opinion.

Instead the Lega’s adherents have moved even further to the right, with support for the outright fascist FdI growing sharply over the past year. It now polls around the 15% mark, more than three times its general election vote. 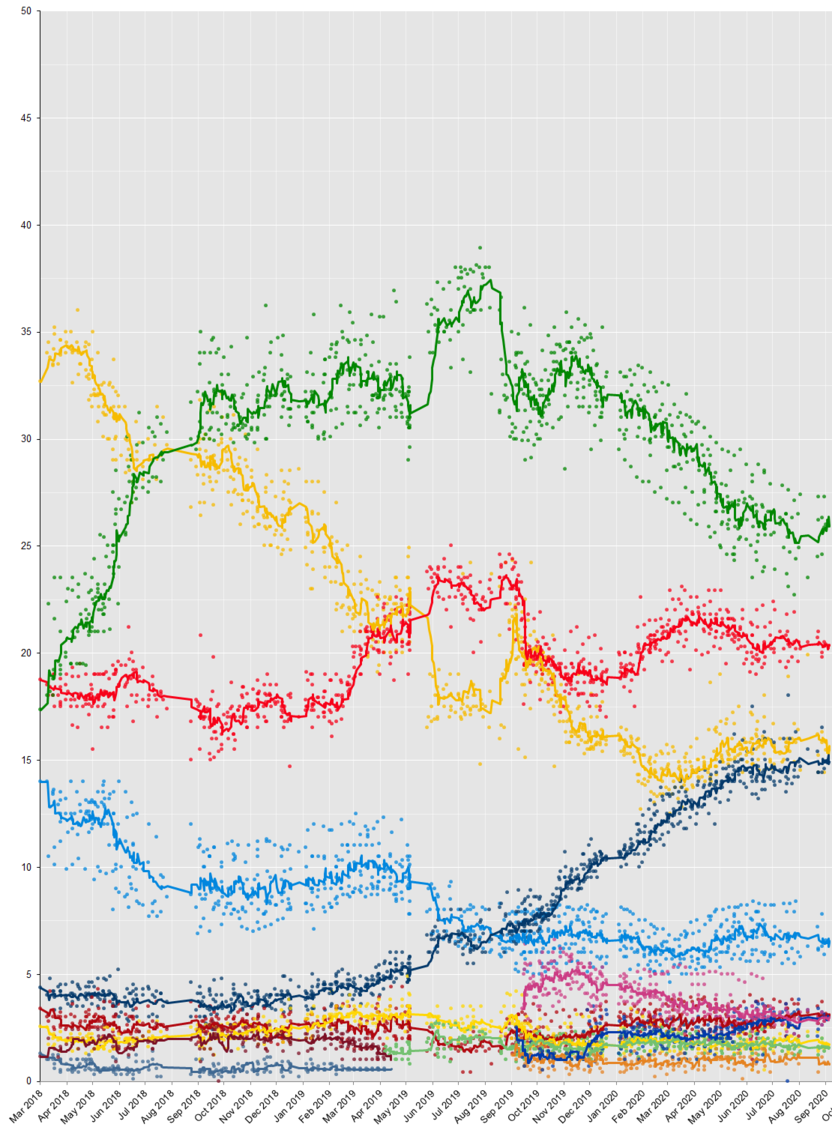 A tracking graph of Italian opinion polls from March 2018 shows the sharp rise and later dip of the Lega (green) and the new surge of the FdI (dark blue) which is now poised to become Italy’s third party.

The FdI’s capture of the Marche regional government will give it a new power base, and party leader Giorgia Meloni greeted today’s election result with glee.

In Marche, the far right bloc gained some votes from the PD-led centre left, which took 43.57% in the 2015 regional election. But has gained more from the PD’s partner in the national government, the M5S whose vote has halved from 18.89% last time to 8.6% now.

And a breakdown of the far right vote in Marche shows how the FdI is gaining on its larger far right rival the Lega, with almost as many FdI votes as Lega votes contributing to the far right bloc’s total.

In Tuscany, the centre left bloc’s vote has risen slightly since 2015 to 48.6%, but the far right, despite its failure to take the region, has seen a greater increase in its vote, from less than 30% in 2015 to 40.5% now, capitalising on plummeting support for the M5S.

Puglia, also seen as a key left-right battleground, has been safely held by the centre left. The centre left vote has dropped slightly from 2015’s total of 48.28% to 46.8%, but the far right has mustered only 39% of the vote, despite another sharp drop in support for M5S.

The centre left’s retention of these two key regions will be widely seen as a success for the PD, amid fears that the far right could take both.

The left also saw its vote increase very sharply in its Southern stronghold of Campania, soaring from 40.29% to 69.4% this time, providing welcome evidence that a stampede to the right is not inevitable.

But in the other regions up for election, the rightward shift among voters has been clear.

In Liguria, Forza Italia’s Giovanni Toti has held his seat for the right with another strongly increased vote, up from 37.71% to 56.1%. A coalition of the centre left with M5S, mimicking that of Italy’s central government, did not even come close, with 38.9% this time – with the M5S element of the vote again collapsing.

Veneto, in the Lega’s northern heartlands, offers another warning of the far right’s gains in these elections as incumbent regional president, the Lega’s Luca Zaia saw his vote increase from 52.19% to 76.8% this time around, dramatically consolidating his position.

Zaia has been credited with a strong response to the coronavirus crisis in the region – in contrast to Lega figures elsewhere, as we reported here.

A breakdown of the vote within Zaia’s electoral bloc shows that a huge chunk – around 45% – came from those voting explicitly for “Zaia president”, while only around 16% marked the ballot for the Lega. That strong personal vote for Zaia could position him well for an internal challenge to Salvini.

The Lega has also taken first place in the tiny French speaking enclave of Valle D’Aosta, which has traditionally been dominated by a Francophone party.

These have not been the election results the Lega’s Salvini wanted, due to the failure of the far right to take Tuscany or Puglia. But they mark a new point in the continuing rightward shift of politics in Italy – and the FdI’s capture of the regional government in Marche is a very grim signal.

Salvini’s stint as interior minister and his brutal racist stance towards refugees made him a figurehead for the far right internationally – and it has fed support for those even further to the right than the Lega.