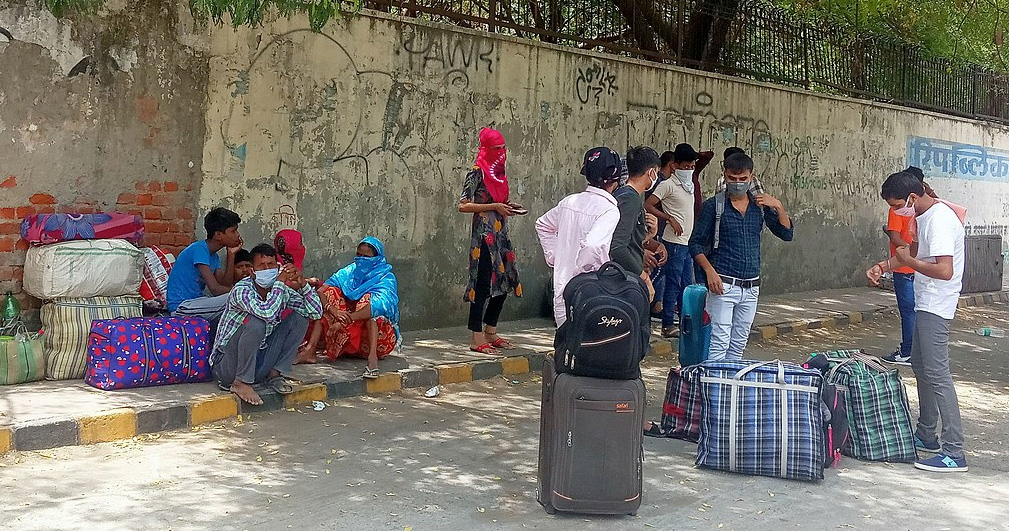 Pandemics have a way of zeroing in and throwing into sharp relief all the structural inequalities in our societies. Globally we have seen that the poorest, most discriminated against groups being the ones hit from all sides by COVID-19.

The intersection of race and class has proved particularly fatal. Black, Asian and other ethnic minority groups have borne the brunt in Britain, with the Bangladeshi community, the poorest part of the population, suffering the hardest blows. In the US, African American, Latino and Native American people have been disproportionally hit. If the virus penetrates the interior of the Amazonian basin, it threatens to wipe out the remaining indigenous peoples.

These present-day inequalities fit the historical pattern of pandemics and epidemics. Indian novelist Mulk Raj Anand’s World War One novel Across the Black Waters follows an ill-fated band of Indian colonial “sepoys” sent to the front in France to fight the Germans.

On their way to the trenches the Indian soldiers share a bottle of brandy with a French soldier. The bottle is quickly passed around, with each taking a swig. Then one of the sepoys suddenly realises they may also be sharing their germs. “The spiteful microbe of influenza is on its hind legs. We must all see the doctor when we reach our destination,” he warns. The others laugh, knowing that is not likely to happen.

The H1N1 influenza pandemic of 1918-19 was the most severe pandemic in recent history. Although known as the “Spanish flu”, it was first identified in US military personnel in the spring of 1918.

It is estimated that about 500 million people – almost a third of the world’s population at the time – became infected with the virus. The number of deaths was estimated to be upwards of 50 million worldwide. This number overshadowed those killed in the war itself (between nine and 11 million military deaths plus between six million and 13 million civilians). 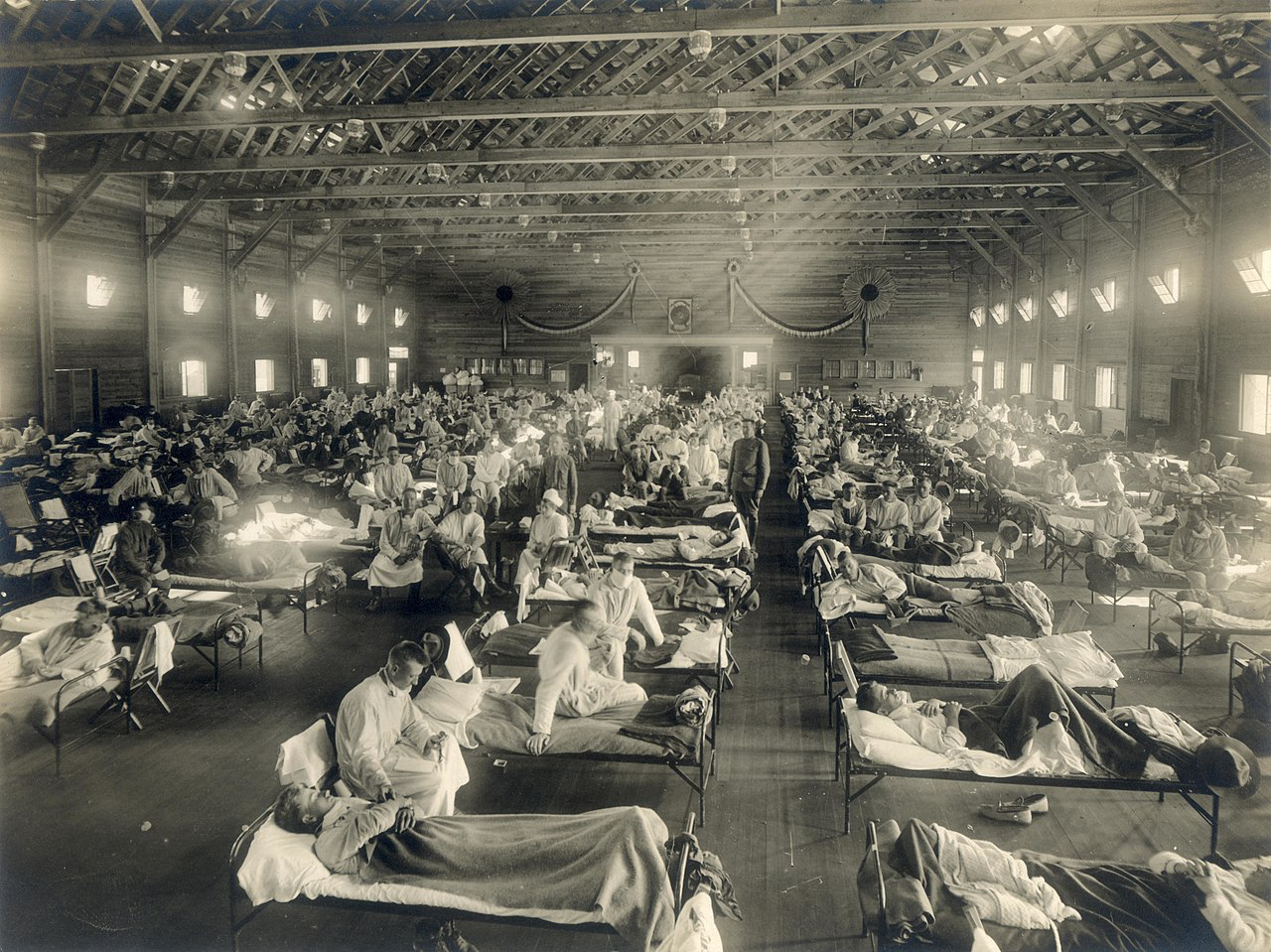 Flu-stricken US soldiers at Fort Riley, Kansas, in 1918

As with COVID-19 today those communities most reviled, unvalued, marginalised, oppressed, exploited, taken for granted, looked down on and easily forgotten, were hit hardest.

The fate of the Dalits in India during the 1918 pandemic is a grotesque but illuminating example. India was then under British colonial rule. The term Dalit was used by the British to describe mostly lower caste groups in society (pejoratively labelled “Untouchables”). These were the groups confined to the least desirable jobs such as cleaners and sweepers, sewage workers, leather tanners and the like.

During 1918 the progress of the virus through the Indian population followed colonial and caste lines. Overall, the virus took 12 to 13 million lives in India, with most dying between September and December of that year.

The flu pandemic travelled along the lines of troop and population movements – from the US Midwest to the theatres of war and then outwards along shipping routes, carried by troops returning to their countries. It reached India via the port of Mumbai (colonial Bombay) in May 1918.

According to research by academic Maura Chhun, the first effect the British rulers in Mumbai noticed was that their estate lawns were suffering.

One report noted, “As the season for cutting grass began… people were so weak as to be unable to do a full day’s work.”

Just as today, those in power downplayed the threat but the virus was already fanning out from Mumbai along inter-state transport routes. Villages along the way were decimated as carriers of the virus passed through. Soon the bodies were piling up so fast they could not be buried or incinerated and lay in the open for jackals to feed on.

But, as Maura Chhun has discovered, your place on the economic and political pecking order made a life or death difference. The British lived in large houses with spacious grounds and could draw on servants and doctors to tend to them.

Most Indian city-dwellers lived in high density housing or remote villages and easily fell victim to the pandemic. Chhun writes:

Geography wasn’t the only dividing factor, however. In Mumbai, almost seven-and-a-half times as many lower-caste Indians died as compared to their British counterparts – 61.6 per thousand versus 8.3 per thousand.

Chhun quotes the Health Officer for Calcutta, who remarked:

The excessive mortality in Kidderpore appears to be due mainly to the large coolie population, ignorant and poverty-stricken, living under most insanitary conditions in damp, dark, dirty huts. They are a difficult class to deal with.

A high-ranking British official predicted, “A good winter rain will put everything right and … things will gradually rectify themselves.”

In fact, British cruelty and indifference to the suffering would spur a new phase in India’s independence movement. The pandemic was not the only causes of the rebellion. A 1918 famine and the impact of Russia’s Bolshevik Revolution were also major contributing factors.

The bitterness and anger broke out nationwide in the spring of 1919, triggered by the British massacre of unarmed Hindu, Sikh and Muslim protesters in Amritsar in the Punjab. In his History of the Massacre at Amritsar, Rupert Furneaux notes:

They had been stricken by severe famine on the failure of the Monsoon in 1918 and had suffered terrible mortality from the world-wide influenza epidemic of that year.

The Armistice found them restless and excited, stirred by the new spirit of personal freedom and national liberty brought to the surface throughout the world by the war, intoxicated by the new conception of the self-determination of peoples voiced by President Wilson of the United States, and agitated by the Bolshevik Revolution of 1917 which they saw as the triumph of the oppressed. The peoples of India, goaded by the ferment of the time, thought that a new dawn was breaking.

The history of the 2020 pandemic has yet to be written – but when it is, perhaps it will map how far, as the pandemic spread, there was a global exodus of the upper middle class and rich from the cities to their isolated boltholes.

How many bankers who normally throng the city of London sat out the pandemic tucked away in the Cotswolds, Wales and remote areas of Scotland and Ireland? How many of the super-rich abandoned their townhouses for their palaces and yachts in tax havens such as Monaco.

We know from newspaper reports that in Paris, the monied elite clogged the roads out of the city as they departed en masse in the hours before the government lockdown decree came into force, for the security of their comfy second-homes – consequently infecting and killing villagers in the rural areas with the virus they were carrying with them.

At the very same time, in the poorest banlieues (suburbs) of Paris, the destitute residents of working class housing estates with substantial North and West African populations were being confined to airless flats without government support or basic resources.

In New York, the Upper East Side was turned into a ghost town as the bankers fled to the luxurious Hamptons area, leaving behind a city wracked with the virus, amid scenes of municipal workers digging the modern equivalent of plague pits to bury the corpses of the poor and unclaimed victims.

India under the BJP

In India – “the biggest democracy in the world” – another type of exodus was set in motion. The political essayist and novelist Arundhati Roy has described how, when prime minister Narendra Modi gave four hours’ notice of a national lockdown on 25 March 2020, “shops, restaurants, factories and the construction industry shut down, as the wealthy and the middle classes enclosed themselves in gated colonies, our towns and megacities began to extrude their working-class citizens — their migrant workers — like so much unwanted accrual”.

Roy writes how millions of “impoverished, hungry, thirsty people, young and old, men, women, children, sick people, blind people, disabled people” were forced on a long march back to their villages, running a gauntlet of violent mobs and police brutality, some dying on the side of the road. She notes:

They knew they were going home potentially to slow starvation. Perhaps they even knew they could be carrying the virus with them, and would infect their families, their parents and grandparents back home, but they desperately needed a shred of familiarity, shelter and dignity, as well as food, if not love.

Today, Modi’s BJP party government and its supporters mimic the cruelty and indifference of the former British colonial regime. The BJP is an extreme Hindu supremacist and ultra-nationalist party with links to Rashtriya Swayamsevak Sangh (RSS), a paramilitary group that has been described as an Indian version of fascism.

A news report described how, in Uttar Pradesh, which is BJP-dominated, migrant workers making their way home through the northern province “were doused in bleach disinfectant used to sanitize buses. Video showed three people, dressed in protective gear, spraying the liquid directly on a group of Indian workers as they sat on the ground in the northern city of Bareilly”.

The report quoted a city official who told CNN:

We sprayed them here as part of the disinfection drive, we don’t want them to be carriers for the virus and it could be hanging on their clothes.

The long discriminated against Dalit population has once again found itself exposed to COVID-19, just as it was to the deadly flu during the 1918 pandemic. Millions of people, about 25% of India’s population of 1.3 billion, are still grouped under the “scheduled castes” (Dalits) and “scheduled tribes” (indigenous peoples) in India’s constitution. 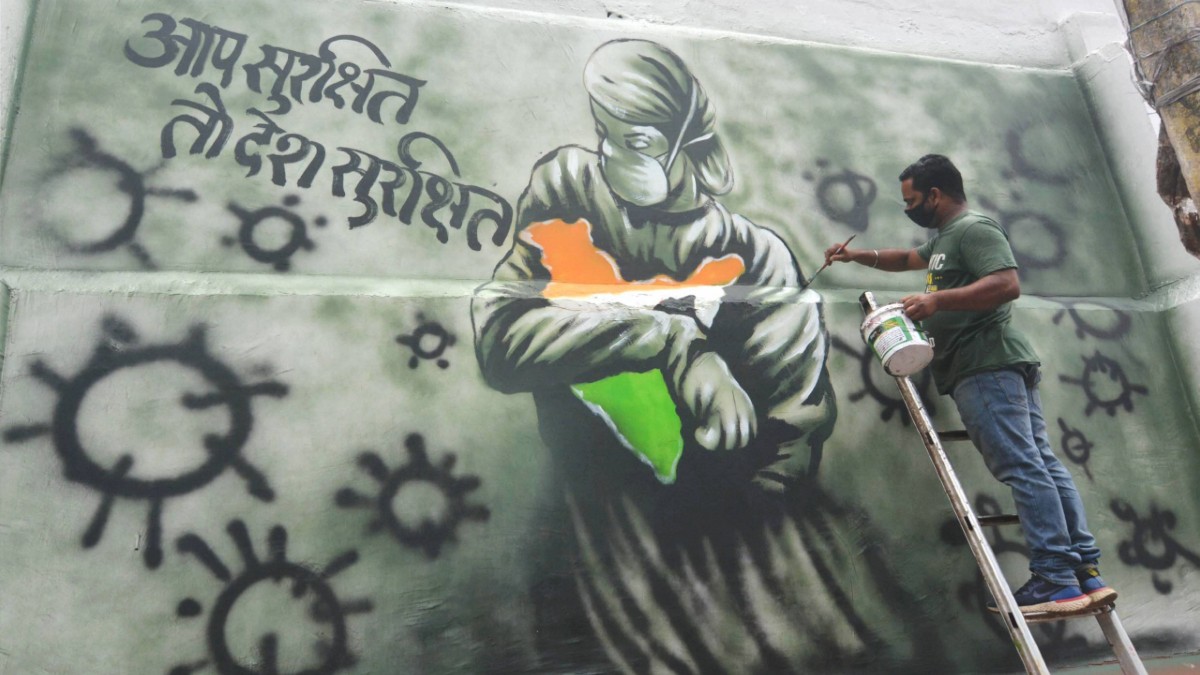 An artist paints a mural urging safety during the Coronavirus epidemic. But there’s no safety for the poorest people. Pic credit PTI

In the state of Anshra Pradesh, a south-eastern coastal region of India, live the indigenous Yanadi communities. Anshra Pradesh’s governor is BJP veteran Biswabhusan Harichandan. Many Yanadis, who were once hunter-gatherers and farmers, have been driven off their land and survive in towns as itinerant traders, toilet cleaners and street sweepers – in other words forced down to the bottom of the social hierarchy.

In April 2020 CNN journalist Priyali Sur filed a report entitled “Under India’s caste system Dalits are considered untouchable. The coronavirus is intensifying that slur”. “>Sur told the story of a group of 57 Yanadi families living in a hilltop village in Anshra Pradesh who, at the start of the lockdown “were barred from going down the hill, even to purchase essentials such as food and medicine”.

The families were part of the Yanadi community, working mainly as waste pickers and drain cleaners and who – even before the coronavirus – were segregated because of their caste. Sur quotes Yanadi villager Polamma, who said, “We’ve been locked up here, like prisoners – we live near a milk factory, and there is not a drop of milk for my children to drink. We are called dirty and they say we spread the disease.

In India tribes such as the Yanadis and the Dalit communities are simultaneously reviled and depended upon – in a direct echo of their treatment under British colonial rule.

They are being forced into the frontline of the COVID-19 pandemic – cleaning streets and toilets, working as disposers of waste and corpses. If they get sick as a result, they mostly likely fall very ill or die. They are socially isolated, there is no medical support for them, and personal protective equipment (PPE) is scarce or non-existent.

Not only they are forced to play Russian roulette every time they set off for work, but they are bullied and ostracised along the way. “Every time I step out, people start shouting, ‘Corona, corona,'” one Dalit from Mumbai told Sur. “Earlier they would walk at a distance because I am a Dalit, but now they call me the disease itself.”