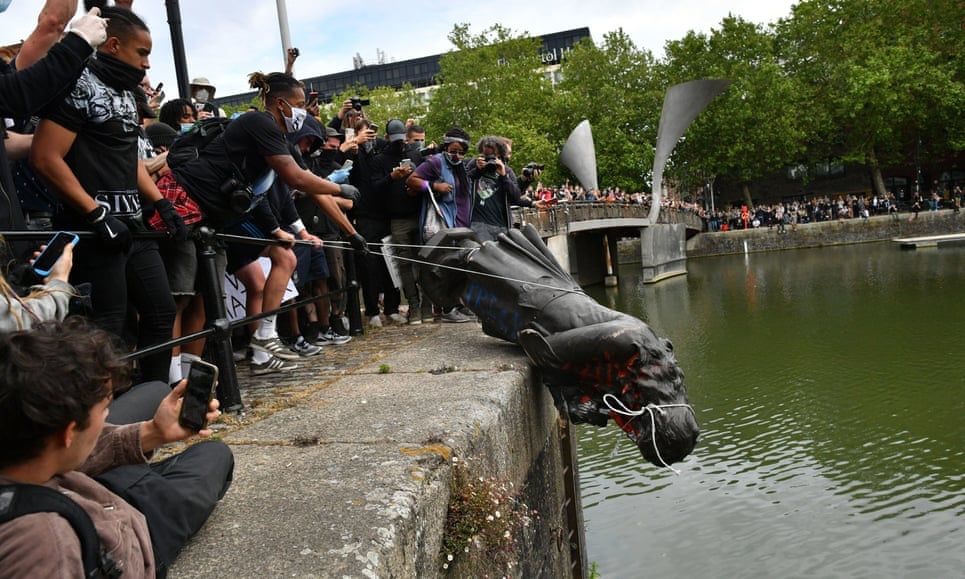 During one of the worst pandemics in recent history, three events have managed to replace the spread of Covid-19 as the main news item. The first was the public murder of George Floyd by police officers in Minneapolis, which was filmed and then viewed with horror across the globe.

The second was the reaction to the murder: protests erupted across the US and then, in solidarity, around the world. The third and most recent event was the dramatic toppling of the statue of slave trader Edward Colston by Black Lives Matter protestors in Bristol. The statue was pulled down by a huge crowd, dragged through the streets and then dumped in the harbour.

These events, although separate, are connected. The thread that draws them together is the hundreds of years of oppression and racial violence against black and brown people, based on the colour of their skin.

The talk all week in the media has been about the rights and wrongs of toppling the Colston statue.

But in the wake of its very public dunking, the Mayor of London, Sadiq Khan, called for the removal of statues and street names commemorating slave owners – leading almost immediately to the removal of the statue of Robert Milligan from its prominent location in London’s Docklands. Over 100 Labour-controlled councils are now committed to removing any statues or monuments connected with slavery and the slave trade. 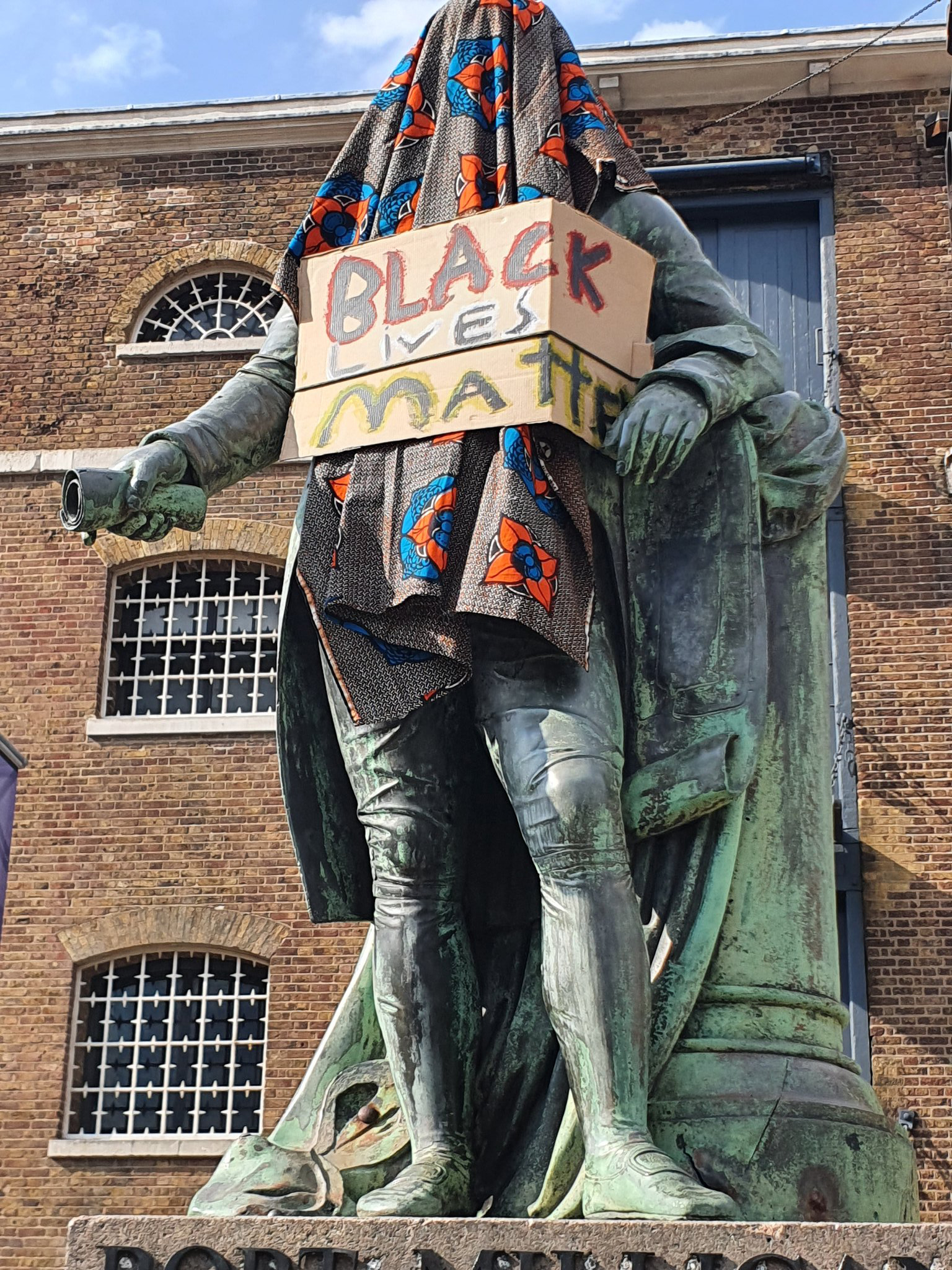 The statue of slave trader Robert Milligan, head covered in West African style patterned cloth and carrying a Black Lives Matter sign, just before being cut down from its plinth. Pic credit: samholdertv on twitter

It seems that in the space of a week Britain has acknowledged a problem that has existed in plain sight for centuries – ever since Britain decided that it needed to be involved in the slave trade and to project its power by establishing an empire through colonisation and the subjugation of millions of people around the world.

What statues won’t tell you

One of the arguments being bandied around is that statues should never be removed because they serve to teach us history. A casual walk around the tourist heart of London, or any major city, would dispel this myth.

Ever since I was a young boy growing up in the capital, I have been fascinated by public monuments and statuary. In our family album there are many photos of me, my mother and my sisters, lined up in front of some monument or other.

These photos were then sent to our relatives in Guyana (formerly British Guiana) as evidence that we had arrived from the fringes of empire to the imperial centre and were now firmly established as citizens. In the years that followed those first forays into the capital, we were to be constantly reminded by racists that my family’s brown skin disqualified us from being considered as British citizens.

I grew up in Eltham, southeast London, in the 1970s, and was subjected to racist abuse on an almost daily basis. However, along with other second-generation youth, I stood – with antiracist white people alongside us – against the rise of the fascist National Front, and sought answers about the roots of racism.

One book had a profound effect on my political education: Peter Fryer’s Staying Power: The History of Black People in Britain. Within its pages, I discovered that there had been a Black, Asian, and minority ethnic (BAME) presence in Britain dating back to the arrival of North African soldiers of the Roman Empire, 2,000 years ago, and that there has been a settled presence for over 500 years.

Could I learn this history from looking at statues and monuments? The answer is a resounding no. Working in the inner city, I soon realised that the hundreds of statues dotted around public spaces were a hand-picked selection of old men, with only the occasional nod to a woman. All of them were white.

Stuart Hall wrote, “Heritage is a powerful mirror. Those who do not see themselves reflected in it are therefore excluded.” I began a quest to see if there were any statues in my hometown to BAME figures.

The only monument I was aware of at that time was the bust of the anti-apartheid leader Nelson Mandela – later to become South Africa’s president – on London’s South Bank, which was erected in 1985. It is only recently, in 2007, that a second memorial to Mandela has been erected in Westminster. 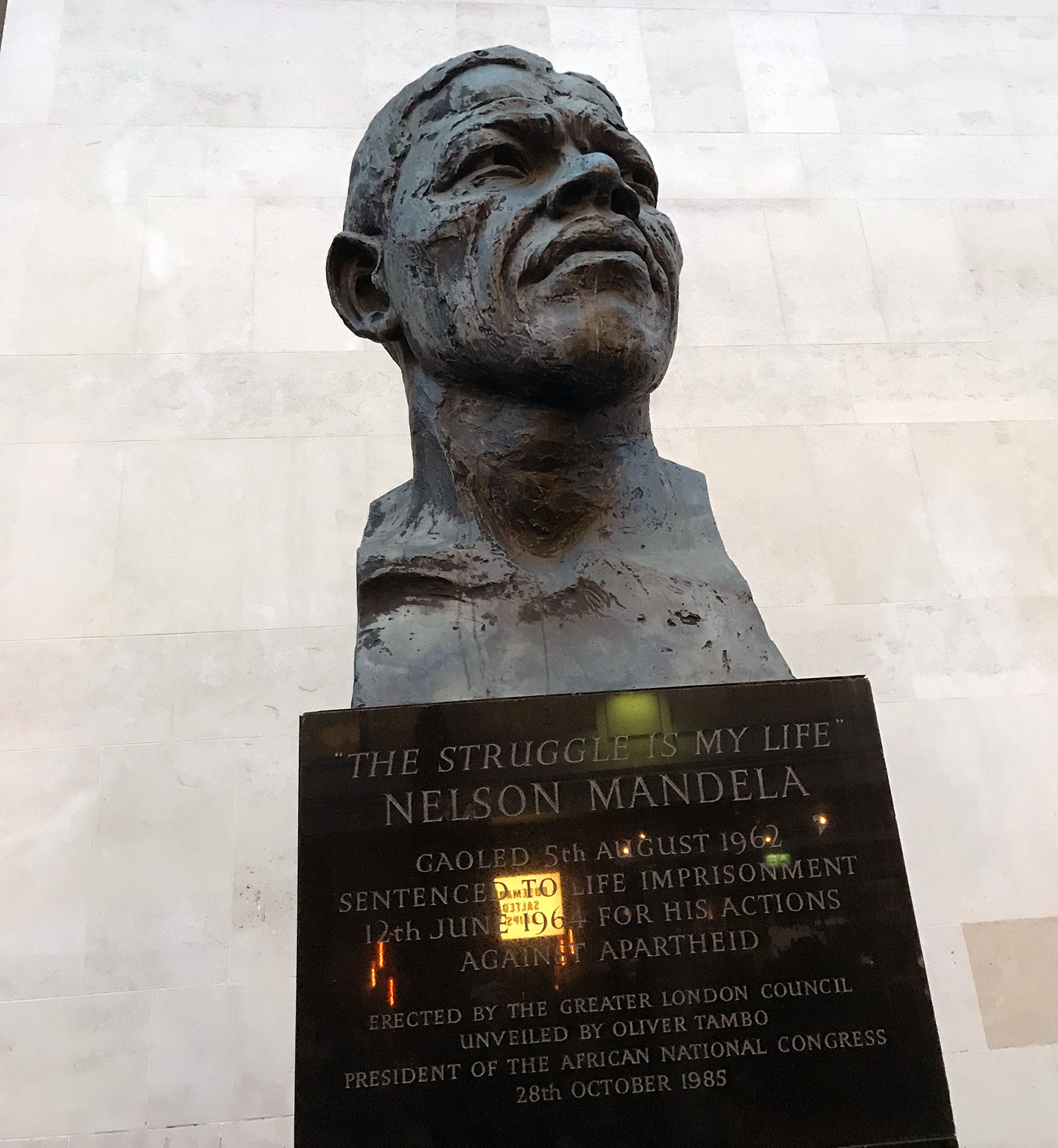 The only black Briton to have a full statue is Mary Seacole – again, only recently unveiled in 2016. A bronze Gurkha has stood on guard in Whitehall since 1997. Memorial Gates, a generic memorial to African, Caribbean and Asian service personnel of the British Empire and Commonwealth, was unveiled only in 2002. A black heritage organisation, Nubian Jak, had to crowdfund for a black war memorial in Brixton, south London, in 2017. There is also the odd plaque and self-funded memorial, to black Britons

But as a true picture of British history, with its imperial connections stretching back hundreds of years, this country’s statuary is beyond inadequate – it’s downright offensive.

Campaigners from Memorial 2007 have been fundraising since 2002 for a memorial in Hyde Park to the victims of the transatlantic slave trade. In 2008, Boris Johnson, then Mayor of London, gave his backing to the project. Last year, Johnson, now Britain’s prime minister, pulled the plug on funding. Yet other memorials costing many times more have been given the go-ahead.

The statues we see in Britain’s public spaces are also fraudulent in terms of what history you can learn from them. The vast majority, which millions of people walk by every day without noticing, just have names and dates on them.

Moreover, most statues were conceived to serve a purpose in the time they were erected, often many years after the deaths of the individuals they portray. The statues obscure uncomfortable truths or serve to erase inconvenient pasts.

The Edward Colston statue was erected in 1895, 174 years after his death. In late-19th century Bristol, strikes, unrest and panic about the end of empire frightened the local elite into promoting Colston – a slave trader and white supremacist – as a man for their time.

The words on the plinth foreground Colston’s philanthropy but do not mention his connections to the Royal African Company, which transported 100,000 enslaved Africans to the Americas and the Caribbean and caused the deaths of at least 20,000 human beings in unspeakable misery. Campaigners had tried to contextualise the Colston statue’s plinth for years without success.

One of the revelations to come out of the Black Lives Matter protests in the US, which targeted symbols of the pro-slavery Southern Confederacy, was that these statues were mass-produced and made of cheap zinc, with many erected as recently as the 1950s.

They were nothing to do with history. Their purpose was to firm up white supremacy in the South at a time when the African American civil rights movement was beginning to organise mass protests.

The statues that have been toppled by protestors in South Africa, the US, Britain, and other places have been rightly targeted as symbols of white supremacy, not just in the past but in the present too.

The protests have forced historians and politicians to defend their tolerance of statues and monuments to these figures. One argument that has surfaced in the debate about the Colston statue is that figures such as Cecil Rhodes, William Beckford, William Gladstone and Robert Peel – now exposed to the glare of public scrutiny in the light of their connections to slave trade and colonisation – were just products of their time and that “most people” accepted slavery, the slave trade and colonisation as normal in the past.

The argument is a gross distortion of the truth. Thousands of people opposed slavery and imperialism at the time, not just in the colonies, where enslaved people faced being worked to death – and resisted by destroying machinery linked to production, running away or rebelling – but also in the towns and cities of the imperial metropoles, where opponents signed mass petitions, established fact-finding missions, held public meetings, boycotted slave-produced goods and took solidarity action.

Trafalgar Square, in central London, with its statues to supporters of the slave trade and imperialists, has also been the venue of many anti-imperialist demonstrations over the decades. 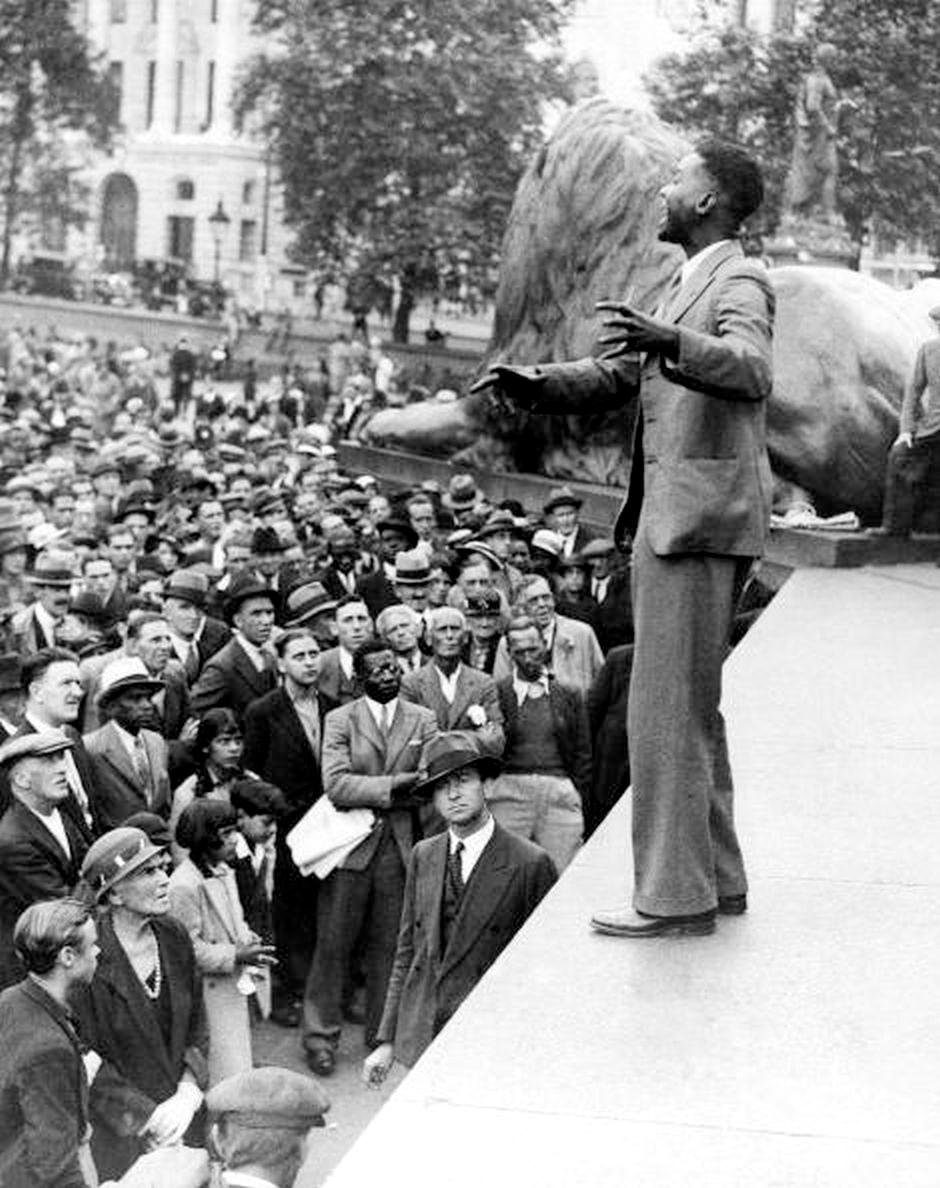 And, of course, statues that have been seen as symbols of oppression have been routinely destroyed in the past, as in the present. The Irish Republican Army (IRA) “decolonised” statues of William III, Admiral Nelson and George II in Dublin between 1928 and 1937 by blowing them up. The Irish government “transported” a statue of Queen Victoria to Australia in 1948.

Is it all about statues?

While defenders of the status quo want to keep talking about statues, the protesters will tell you that they are not only protesting about statues. They stand in solidarity with all Black Lives Matters protestors across the globe. They demand an end to police brutality and systemic racism.

This is not just a US question. It is a huge issue here in Britain. All the Black Lives Matter protestors and the many supporters who have not been able to attend protests during the coronavirus crisis know that Britain has not dealt with the problem of racism that it helped to create.

We have a prime minster who uses racist language, describing black people as “piccaninnies” with “watermelon smiles”, and Muslim women as resembling “letterboxes”.

In recent years, we have had the “hostile environment” policy in Britain which targeted black people, leading to the Windrush scandal. There are questions of disproportionate unemployment, health inequalities and other social inequalities. BAME people still face racist abuse, micro-aggressions, violence and even murder. Attempts to change this appalling state of affairs should be applauded not discouraged.

People across the world should stand shoulder to shoulder with the Black Lives Matter campaigners and those protesting to “decolonise” our public spaces and society.

Now, with technology that can broadcast injustices like the murder of George Floyd across the globe in minutes, and with millions of young people clearly wanting radical change on a raft of issues – ranging from climate change to racism, sexism, homophobia, transphobia and inequality – it is important to seize the moment and use the space created by the protestors to demand and plan a better world.

John Siblon is currently researching hierarchy, memory and commemoration of African and Caribbean service personnel after WWI for his PhD.