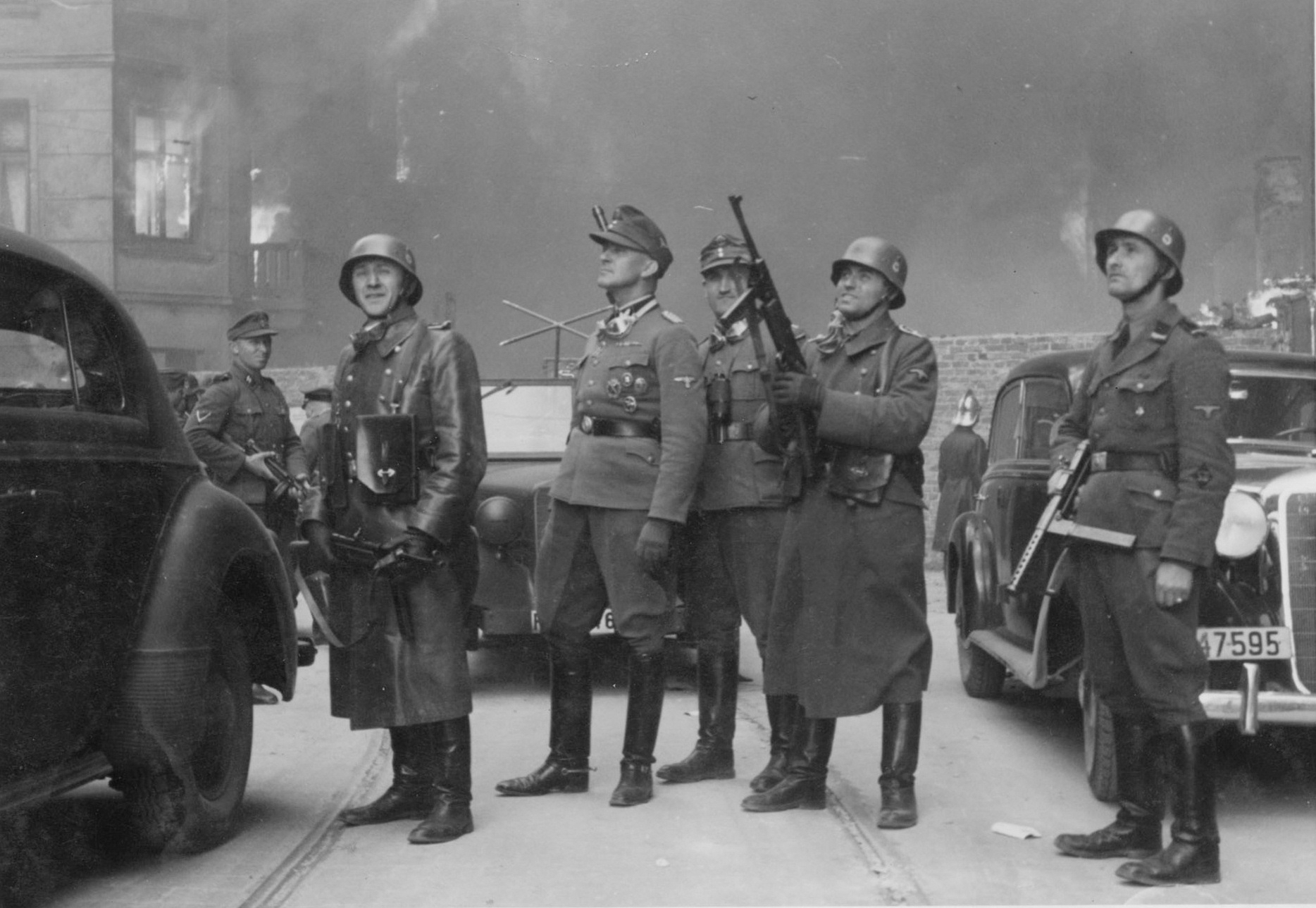 SS commanders directing the liquidation of the Jewish Ghetto in Warsaw. This photo can be found in the Stroop report

Today, 16 May 2020, marks the 77th anniversary of the crushing of the Warsaw Ghetto Uprising. The uprising was a feat of resistance against all odds that should always be remembered – but it has an intriguing postscript that has remained hidden from history.

On the day the revolt by the ghetto’s Jewish resistance fighters was crushed, Nazi SS general Jürgen Stroop sent the following communiqué to the SS headquarters in Berlin:

180 Jews, bandits, and subhumans were destroyed. The Jewish quarter of Warsaw is no more! The grand operation terminated at 20.15 hours when the Warsaw synagogue was blown up…The total number of Jews apprehended and destroyed, according to record, is 56,065.

During the 28 days of the uprising, Stroop commanded the Nazis’ forces as they tried to crush the revolt – and in the process he sent daily reports to his superiors in Berlin. The so-called Stroop Report is an important historical record of the events of the uprising – and a testament to the brutality of the Nazis, in the words of their own commander. 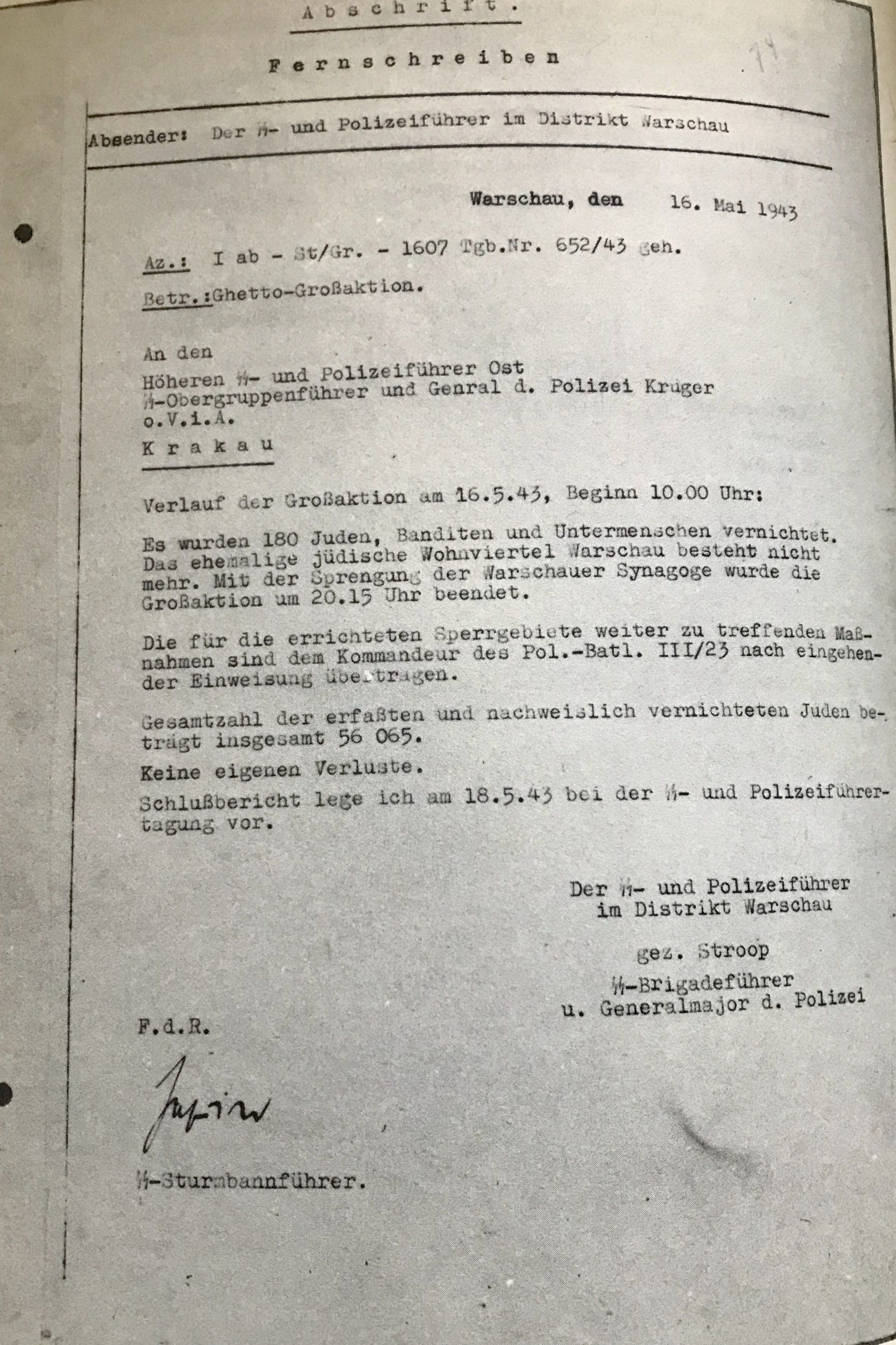 The original report by Stroop on the liquidation of the Ghetto 16 May 1943 (See translation at the bottom of this article). Pic credit: Dream Deferred from archive material

So proud of the operation was Stroop that he produced a private leather-bound photo album chronicling the destruction of the ghetto, which he headed, “The Jewish Quarter of Warsaw is no more.”

Most of the images that we see of the uprising – and many of the most famous images of Jewish people in the ghetto – come from this album and although they are of great historical importance they have to be treated as the victors’ interpretation of the events.

The Jewish resistance was led by the Jewish Fighting Organization (ŻOB) and the Jewish Military Union (ZZW). They were equipped with three or four machine guns, two mines (only one of which worked), some rifles, pistols, grenades and Molotov cocktails.

But for 28 days, the half-starved, poorly equipped and hopelessly outnumbered Jewish resistance fighters beat back the Nazis. Marek Edelman, the only surviving ŻOB commander, said that the motivation for fighting was to “pick the time and place of our deaths”.

They faced 821 Waffen SS troops and nearly 1,300 Trawniki (Central and Eastern European troops who fought on the side of the Nazis), plus the Polish police force based in Warsaw. The Nazis used tanks, armoured cars, artillery and flamethrowers to crush the resistance.

The suppression of the uprising was brutal – 13,000 Jews were killed and a further 50,000 were captured and sent to the Nazis’ death camps. Only a few hundred fighters escaped from the ghetto – Edelman was one. 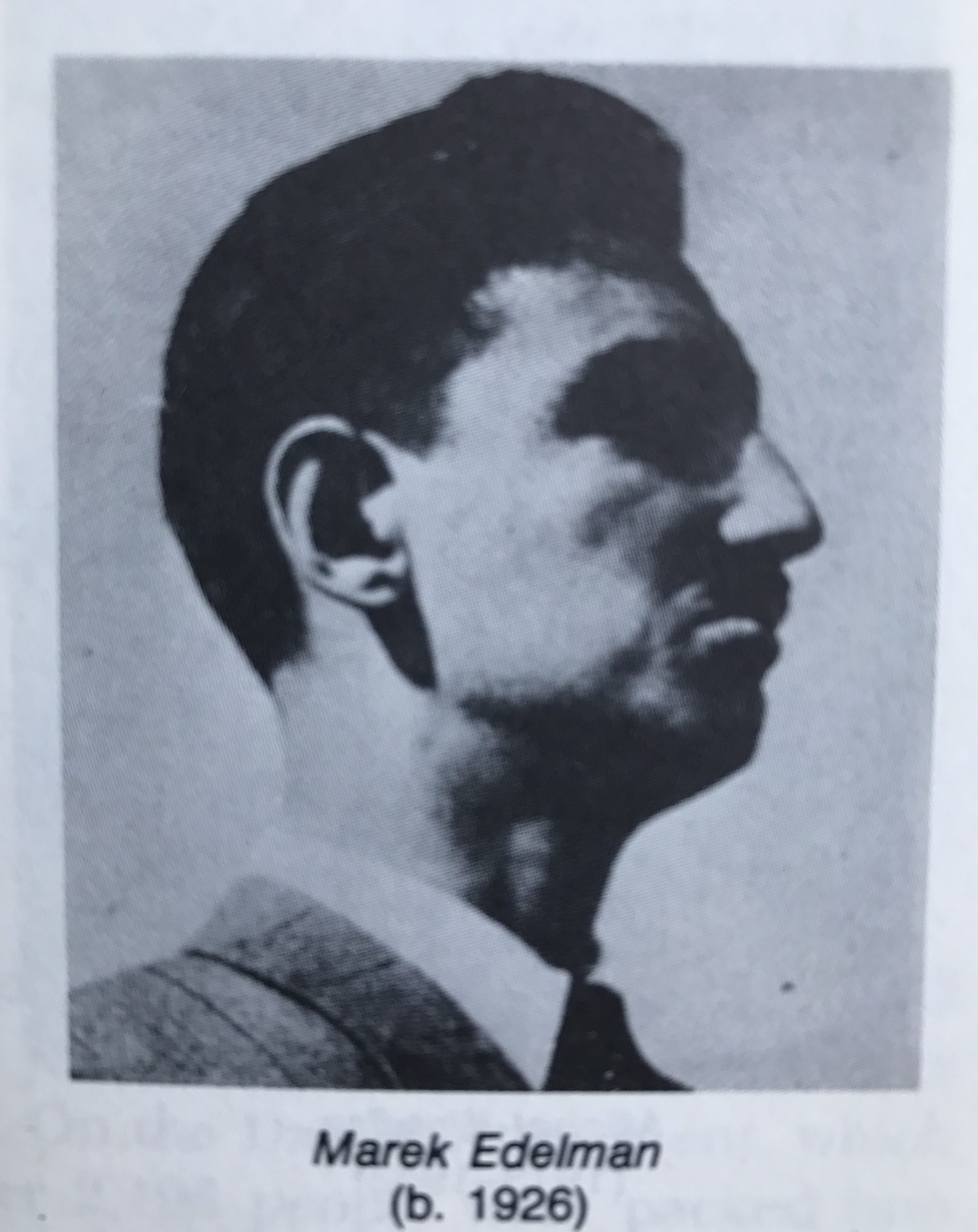 Stroop claimed that the uprising officially ended on 16 May 1943, when he personally pressed the detonator blowing up the Great Synagogue of Warsaw.

Despite these claims, small bands of Jewish fighters continued to hold out until mid-June and the last recorded attack on the Nazis in the ghetto took place as late as 15 September 1943.

But the story doesn’t end here.

In May 1945, Stroop surrendered to US forces in Bavaria, pretending that he was a private in the German army. After his true identity was revealed he was tried and sentenced to death for the massacre of nine US POWs.

He was then returned to Poland and tried for his role in the liquidation of the Warsaw Ghetto. 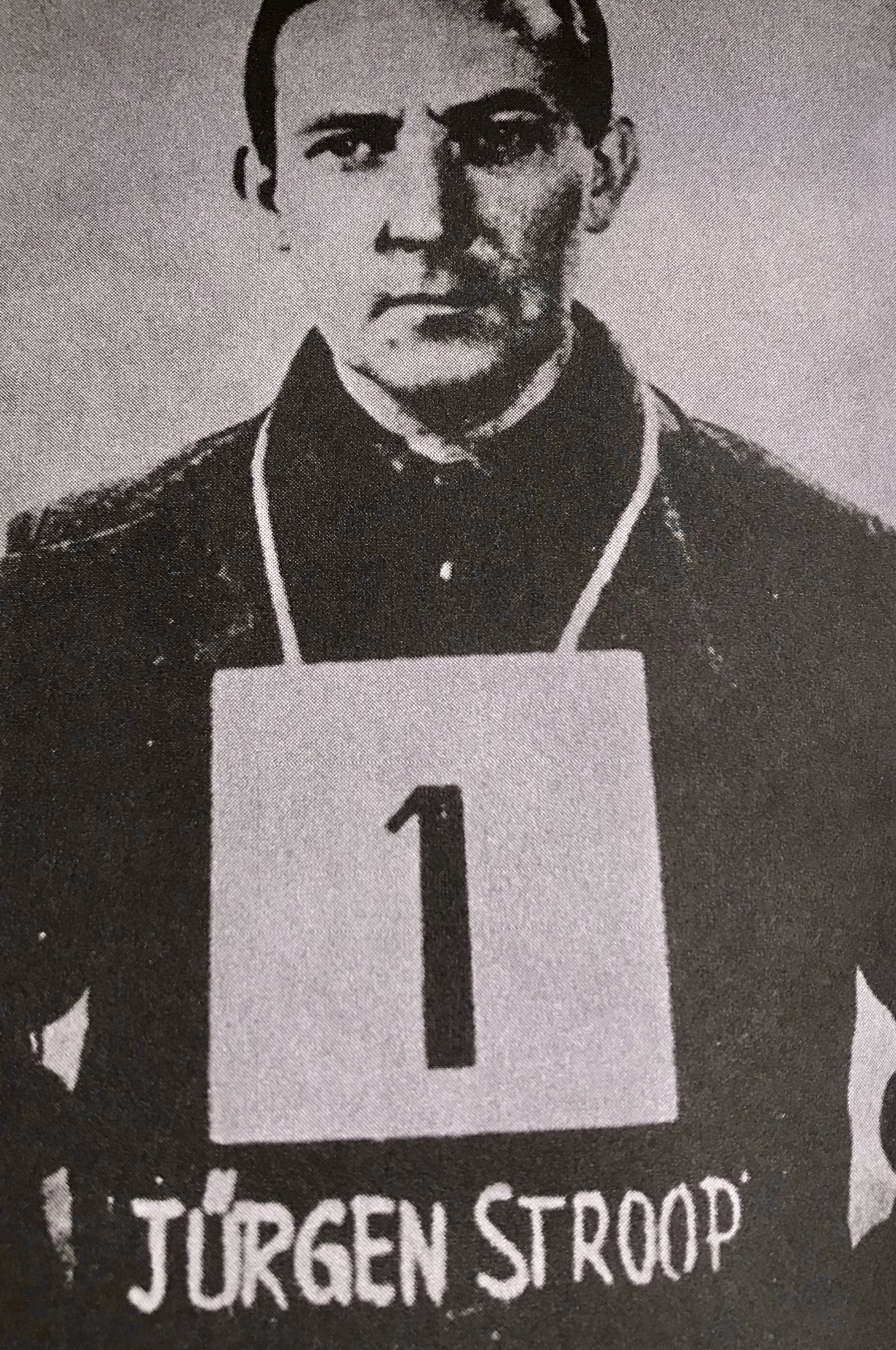 But before he met justice, Stroop had an encounter that has been been largely hidden from history ever since: the Polish prosecutors called on Marek Edelman to confront Stroop and challenge his account of the liquidation. The resistance fighter and the commander of the Nazi assault came face to face.

In 1951 Edelman attended the offices of the Polish Commission to Investigate Nazi Crimes, where he confronted Stroop in person. Edelman’s account of the meeting is understated and without trace of wanting revenge. Describing the encounter, he told Polish journalist Hanna Krall:

The prosecutor told Stroop who I was… I was asked whether I’d seen him kill people. I answered that I had never seen this man before… The man standing before me at attention, without his belt; he had already received one death sentence… I just wanted to leave the room as quickly as possible.

Stroop was found guilty and was hanged in Warsaw on 6 March 1952.

If there is just a tiny slither of justice in this tale, it is the fact that Marek Edelman survived the uprising and the Nazis’ liquidation of the ghetto – and Stroop, the man responsible for the deaths of nearly 60,000 Jews, was forced to face him.

Maybe of more importance is the fact that for the rest of his life Edelman, who died in 2009, kept the memory of the Jewish resistance in the ghetto alive. You can read his own account in the book The Ghetto Fights.

Re Grand Operation in the Ghetto

To:
Higher SS and Police Leader East, SS General and General of the Police Kruegar – or Deputy

180 Jews, bandits, and subhumans were destroyed. The Jewish quarter of Warsaw is no more! The grand operation terminated at 20.15 hours when the Warsaw synagogue was blown up.

To the Commander of Police Battalion III/23, who received a thorough introduction, were transferred all necessary measures to be taken concerning the restricted areas that have been established.

The total number of Jews apprehended and destroyed, according to record, is 56,065.

We had no losses.

I will submit the final report to the conference of SS and Police Leaders on 18 May 1943.

SS and Police Leader in the Warsaw District