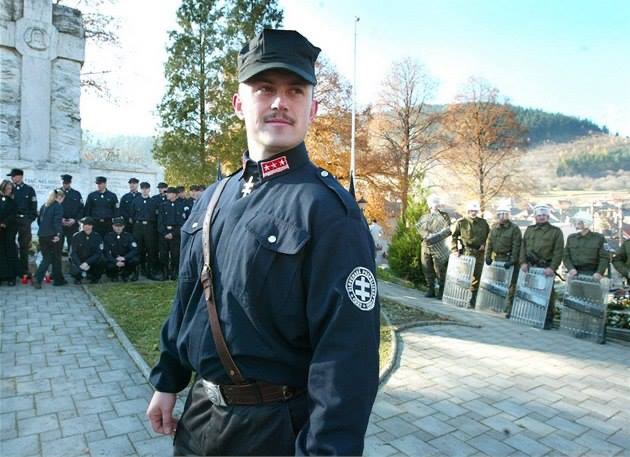 Slovakia’s nazi and ultranationalist parties have suffered a significant setback in the country’s general election.

Marian Kotleba’s nazi L’SNS (the People’s Party – Our Slovakia) has seen its trajectory halted after a steep rise in support over the past eight years. With the final results in the 29 February election now declared, Kotleba’s party stood at 7.97% – marginally below the 8.04% it took in 2016, when it gained 14 MPs. In 2012 the L’SNS had scored just 1.58% of the vote.

The flatlining result in this election is a severe disappointment for the L’SNS after a year in which opinion polls showed it consistently gaining double figure percentages, regularly hitting 12 or 13%. It had hoped to come second in the election but now lags well behind the conservative Ordinary People party and the nominally centre left SMER.

Meanwhile the ultranationalist SNS (Slovak National Party) – which had been part of a ruling coalition with SMER – has been wiped out, failing to pass the 5% threshold needed to take seats in parliament. Until this election it had 15 MPs in the 150 seat parliament. Its vote has crashed from 8.6% to just 3.16%.

The results mean that although L’SNS has been able to almost maintain the level of its vote, its trajectory has been halted while the loss of all the SNS seats means the total number of MPs for these two parties will be almost halved.

It is important to note, however, that the anti-immigrant far right “We Are Family” party (SME Rodina) has increased its vote slightly from 6.6% to 8.24%. This party is a member of the Identity and Democracy group of fascist and far right parties in the European Parliament.

Who are the L’SNS and the SNS?

Kotleba set up the L’SNS in 2010 after its predecessor, the Slovak Togetherness-National Party was banned by the state in 2008 for its violent and racist activities.

He is a staunch and open admirer of Jozef Tiso, leader of the wartime Slovak State, a puppet government operating under Hitler’s Nazis.

The L’SNS party built its base by targeting Slovakia’s Hungarian minority and, especially, its Roma minority, which already faces extreme racism and discrimination. The party’s targets also include immigrants, particularly Muslims, and Kotleba is deeply antisemitic.

In 2013 Kotleba won control of the regional government of Banska Bystrica, home to one of the largest Roma communities in Slovakia, with about 20% of the country’s Roma population living in the region. Civil rights groups reported in 2015 that physical attacks on Roma people went up 150% after Kotleba became regional governor.

The ultranationalist SNS is also a very ugly outfit. SNS leader Andrej Danko has tried in recent years to tone down the party’s statements in public, but former leader Ján Slota was more open about his party’s views.

The conservative Ordinary People party stood on a populist, anti-corruption ticket, capitalising on widespread public anger after the killing of an investigative journalist in 2018. The party has signalled possible restrictions on abortion rights and is against civil partnerships and adoption rights for same-sex couples. It has topped the poll with 25.03%.

SMER has its own foul record of attacking immigrants and especially Muslims – although Slovakia sees little immigration.

SMER under leader Robert Fico is not a traditional social democratic party: it is a descendant of the Stalinist Communist Party that ruled the former Czechoslovakia, and has relied heavily on nationalist and racist rhetoric to gain votes in the past.

It was suspended from the European Parliament’s PES social democratic bloc in 2006 when Fico invited the SNS, then led by Ján Slota, to join him in a coalition government.

Racism in Slovakia, particularly directed at Roma people, is widespread and very severe – both the fascists and populist racist politicians tap into this at election time.

Roma people are heavily persecuted and, in many areas, live in ghetto districts behind a system of walls and fences. Amnesty International has repeatedly highlighted the segregated “education” provided by the authorities to Roma children in schools made out of shipping containers.

Academics and activists have also pointed to the lack of critical reflection on Slovakia’s wartime history.

The Slovak State and its Hlinka Guard militia – so admired by today’s fascists – rounded up Jewish people for deportation and murder. Around 75,000 Slovak Jews, 83% of the pre-war total, were killed in Nazi death camps.

Now, as fascist and far right parties are growing in strength internationally, the setback for the Slovak State’s modern-day admirers is welcome news. But Slovakia’s minority groups still face a very difficult situation.