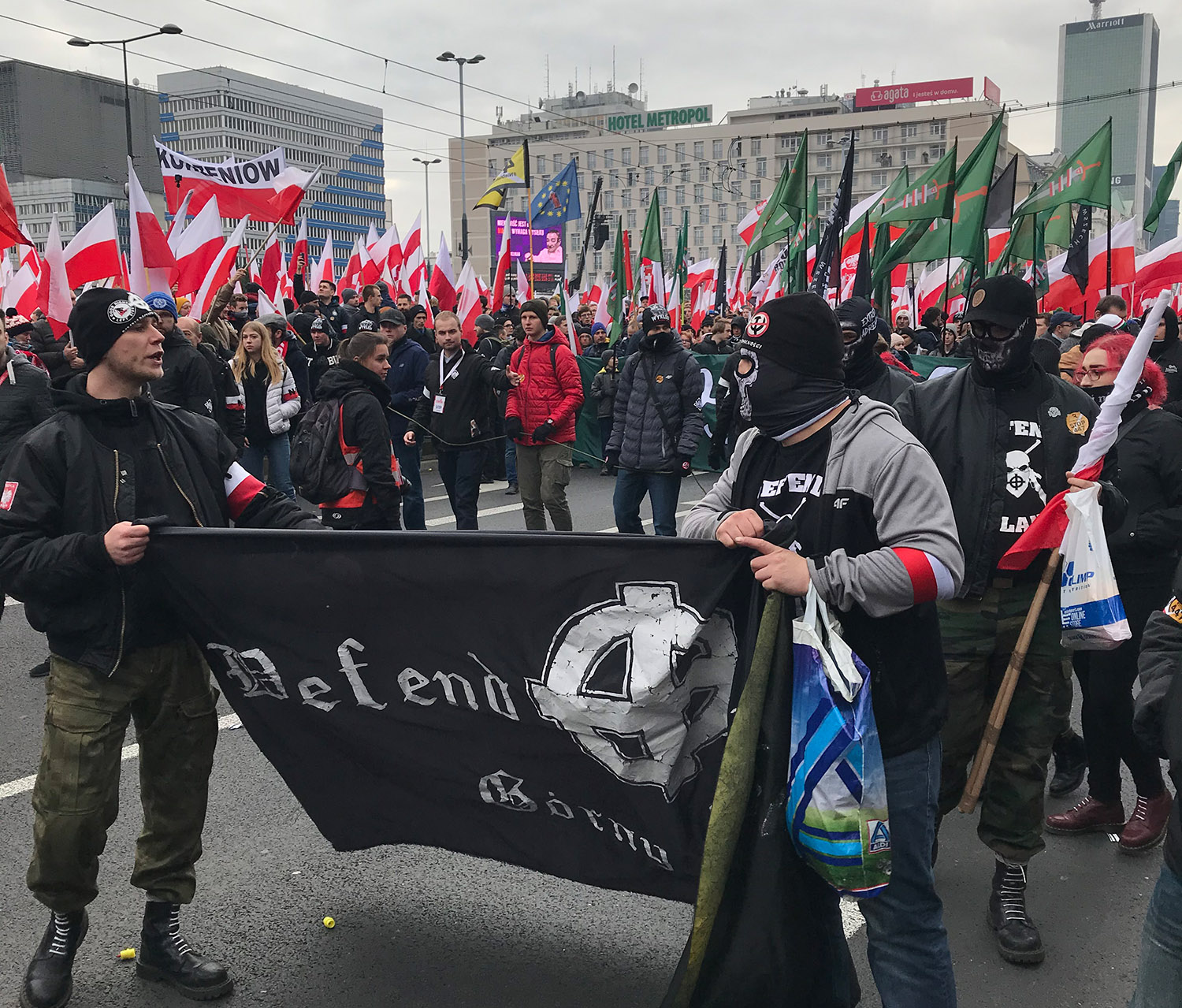 White Power symbol on a banner at the 2019 Independence Day march, Warsaw. Behind this are the green sword flags of fascist group MW (All-Polish Youth). Pic credit: Dream Deferred

By any measure, yesterday’s fascist-led Independence Day march in Warsaw was terrifying. The authorities said 50,000 people marched through the Polish capital, while the organisers claimed 150,000. The true figure is likely to be somewhere in between.

It was obviously huge, however. Marchers lined up over 60 abreast at the start and the demo took more than an hour to go past its starting point. And thousands more joined it on route and at the final rally. 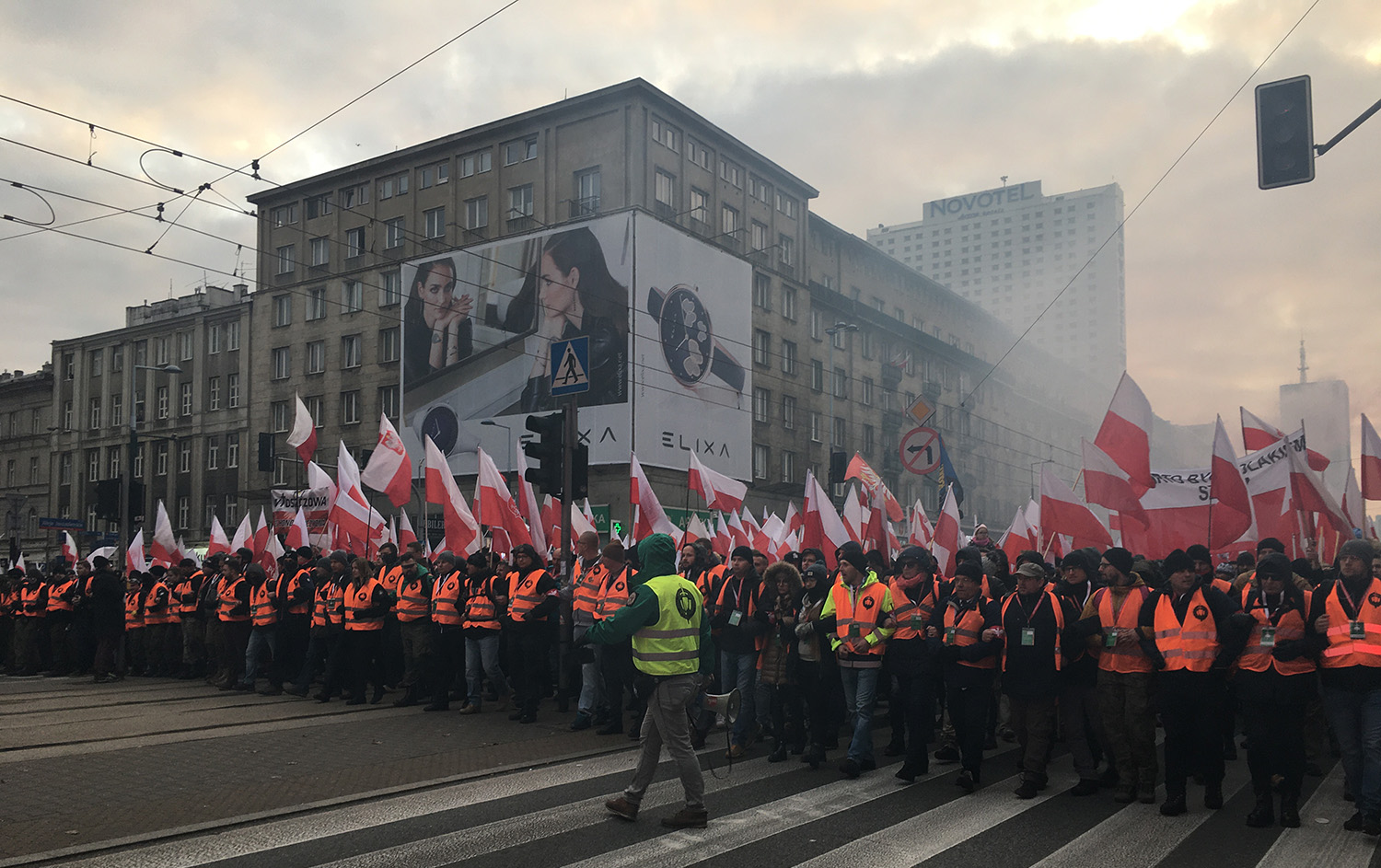 The front of the march gives an idea of its scale. Pic credit: Dream Deferred

Dream Deferred has reported on this annual march over the past few years (see our previous reports in 2012, 2014, 2015 and last year, 2018). Apart from last year’s demo marking 100 years of Poland’s independence – which was backed by the country’s president, Andrzej Duda from the ruling far right Law and Justice (PiS) party, and was joined by the armed forces – this was the biggest march to date, by a significant margin.

While Duda’s presence on last year’s demo gave it a more mainstream appearance than usual, this year’s demo had a much harder political edge to it and was much more openly dominated by the fascist organisations.

It has always been possible to spot White Power and other fascist symbols on the demos, but yesterday they were frequently in evidence. 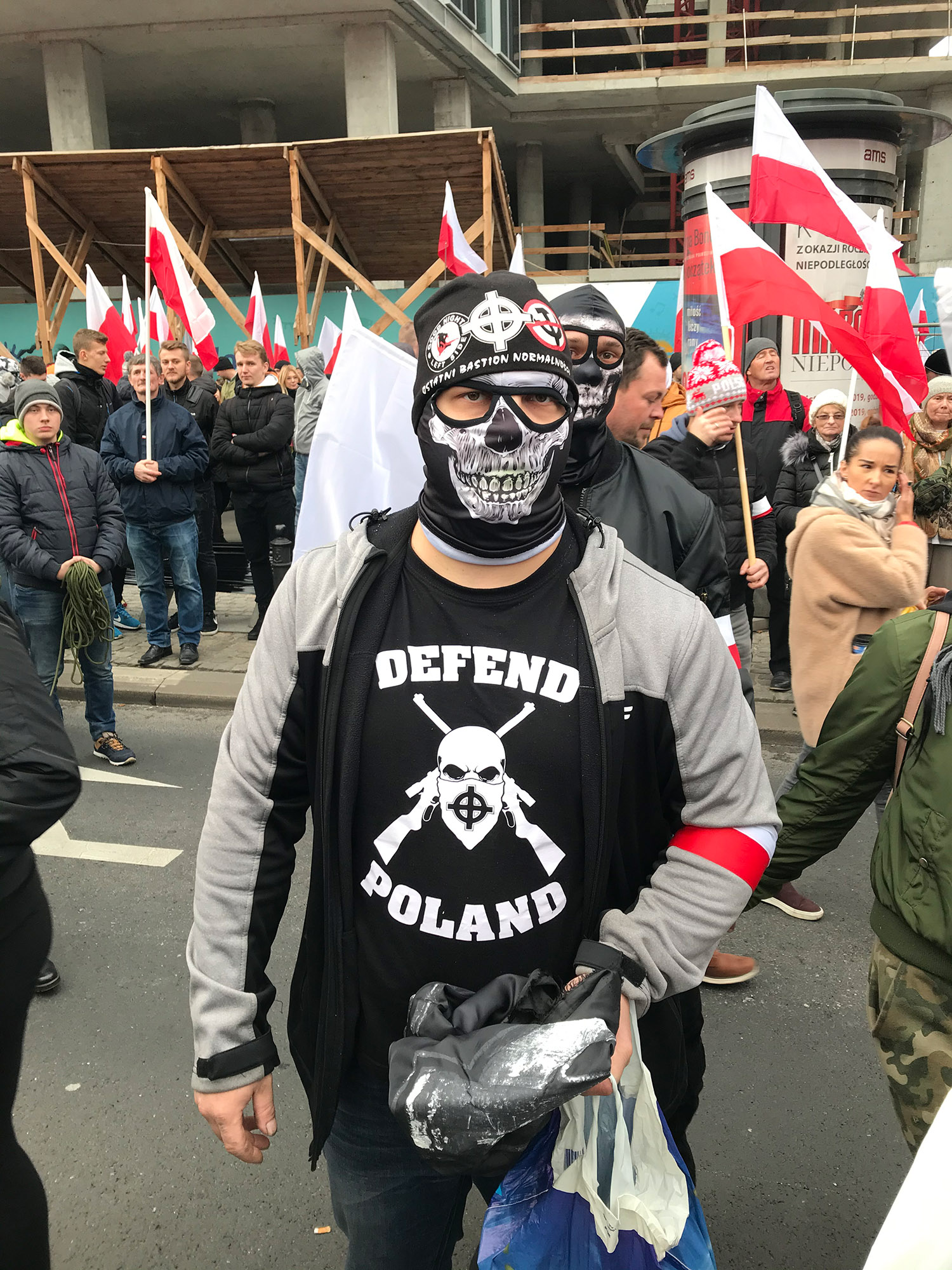 White Power symbolism, guns and a death’s head – it is meant to look threatening and it does. Pic credit: Dream Deferred

This year, the PiS leadership elected to hold its own separate events to mark the national occasion, abandoning Independence Day itself to the fascist groups. We observed the Warsaw PiS rally on the night before, 10 November, and it was a small affair – possibly 2000-strong.

Independence Day, 11 November, is a very important date in Polish society. It celebrates the creation of the modern Polish state and its independence from the German, Russian and Austrian empires. The day has traditionally been marked by huge parades, festivals and church services.

After the collapse of the Stalinist regime in 1989, the parades and rallies were led by mainstream political parties and the Catholic church.

But since 2012, Poland’s two main fascist parties have wrested control of the march from the establishment.

The first of these is the National-Radical Camp (Obóz Narodowo-Radykalny – ONR), the modern successor to a pre-war Polish fascist movement of the same name. It uses a swastika-like sword symbol, the falanga.

The All-Polish Youth (Młodzież Wszechpolska – MW) is the other key organisation behind the independence march. Its green flags, with a long sword wrapped in a red and white ribbon, were prominent on the demo.

Both groups have paramilitary origins but in recent years have come together as an electoral alliance under the name Ruch Narodowy (National Movement). Now RN is in turn part of the Konfederacja party.

This year’s Independence march came just weeks after big gains for the far right in Poland’s parliamentary elections, in October. The ruling PiS party’s vote went up from 37.58% in 2015 to 43.59%.

Meanwhile, the Konfederacja – the lash-up between fascist RN and hardcore far right politician Janusz Korwin-Mikke – took 6.81% of the vote, winning 11 MPs’ seats. Of these, five MPs are members of RN and this parliamentary group includes the organisers of the Independence Day marches.

RN had previously sneaked into parliament under cover of the populist Kukiz’15 group – this time they have been far more open about their politics. The five Konfederacja MPs also spoke at yesterday’s march.

There is a dynamic relationship between PiS and the RN fascists, with the fascists acting as a ginger group, urging PiS rightwards, while every shift by the ruling party in turn legitimises and boosts the fascists.

So the PiS fought an election campaign that was deeply homophobic, picking up a key theme pushed by the fascists – the supposed dangers of “LGBT ideology”.

The PiS’s focus on supposed “family” issues, such as attacking LGBT people and Poland’s already limited abortion, is not solely ideological, however. In government, the PiS has also introduced a “500 plus” child benefit scheme, paying families 500 złoty (about £100) each month for every child after the first. This has genuinely improved the lives of many poor people and is massively popular.

The Konfederacja centred much of its electoral campaigning on the antisemitic theme of “Stop 447” – opposition to a US law requiring US authorities to report to Congress on different countries’ progress in compensating Holocaust survivors (or their heirs) for property seized during the Holocaust.

Fascist activists have sought to whip up a frenzy around this antisemitic motif, which in turn has brought statements from the PiS leaders that they will refuse “a single zloty” in restitution for Jewish Holocaust survivors or their families.

These key themes of homophobia and antisemitism were echoed on the march.

This marked something of a new political turn. As with previous Independence Day protests, there was a strong emphasis on celebrating Poland’s spiritual and political rebirth, birth both at the end of World War One and after the collapse of the Communist regime in 1989.

But on previous 11 November marches, the fascist ONR and MW have focused on the “main enemies” of migrants and Muslims, seeking to build on the Europe-wide tide of anti-migrant and anti-Muslim racism in the wake of the so-called “refugee crisis” of 2015.

This time, Christian and “family” themes were emphasised far more. The symbol of the march was a clenched fist holding a rosary, bearing the slogan “Keep the whole nation under your care,” which can be read both as a Christian prayer and as a nationalist exhortation. The clenched fist is also a coded message: as one demonstrator told me, “It symbolises White Power.” 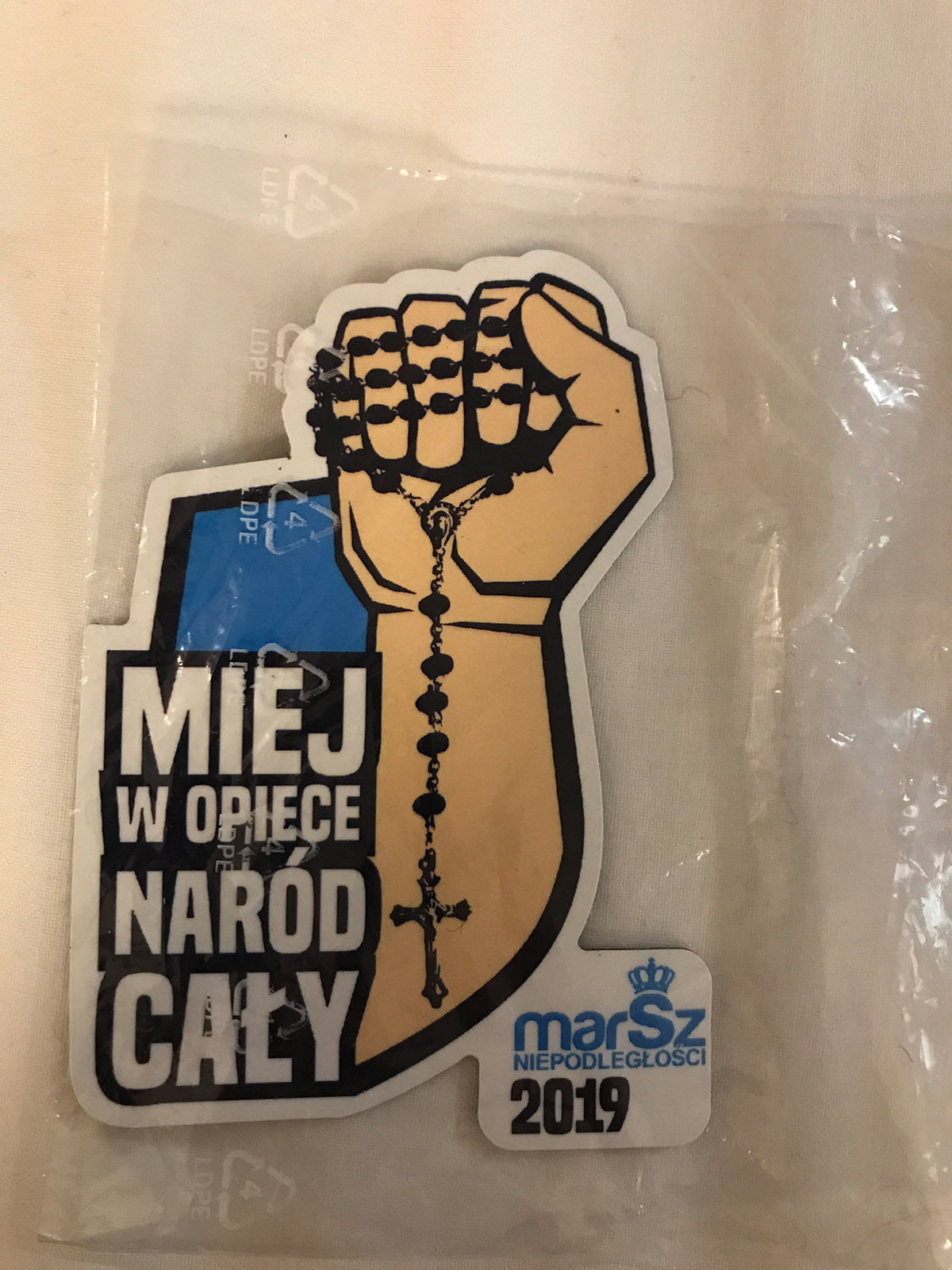 A fridge magnet bearing the symbol and slogan of the march. Pic credit: Dream Deferred 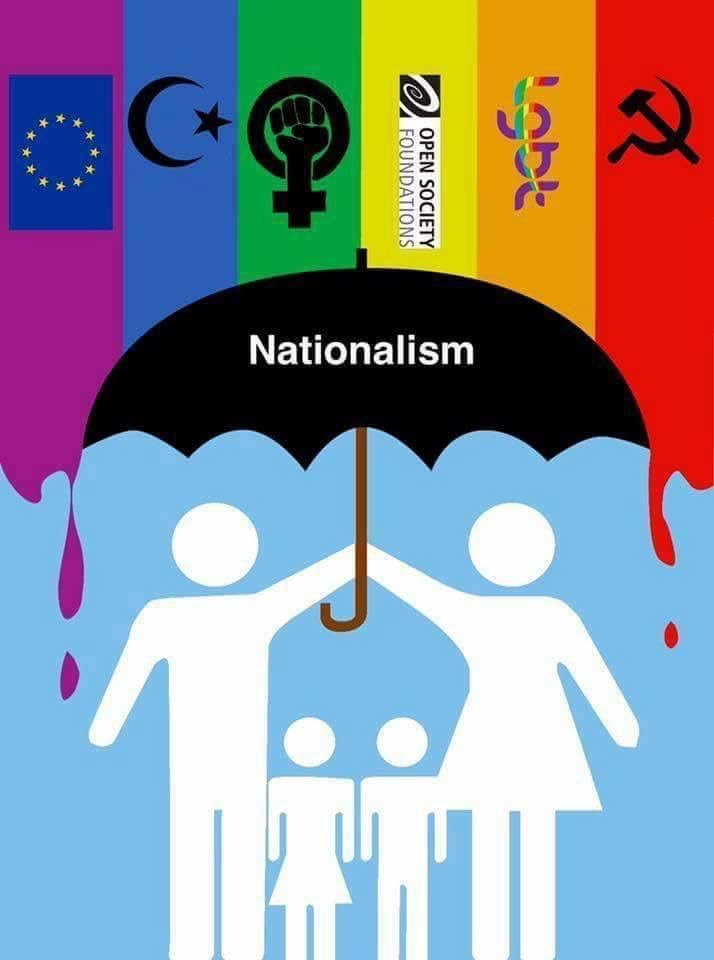 A popular internet meme was reproduced on a card, illustrating the wide range of people the fascists hate, with a particular emphasis on LGBT people.

Around one in three of those on the march wore a “stop 447” badge or sticker, with the slogan also appearing on special yellow and black flags. Some marchers also carried placards that denounced “Holocaust hyenas” or declared, “No reparations for Jews”. 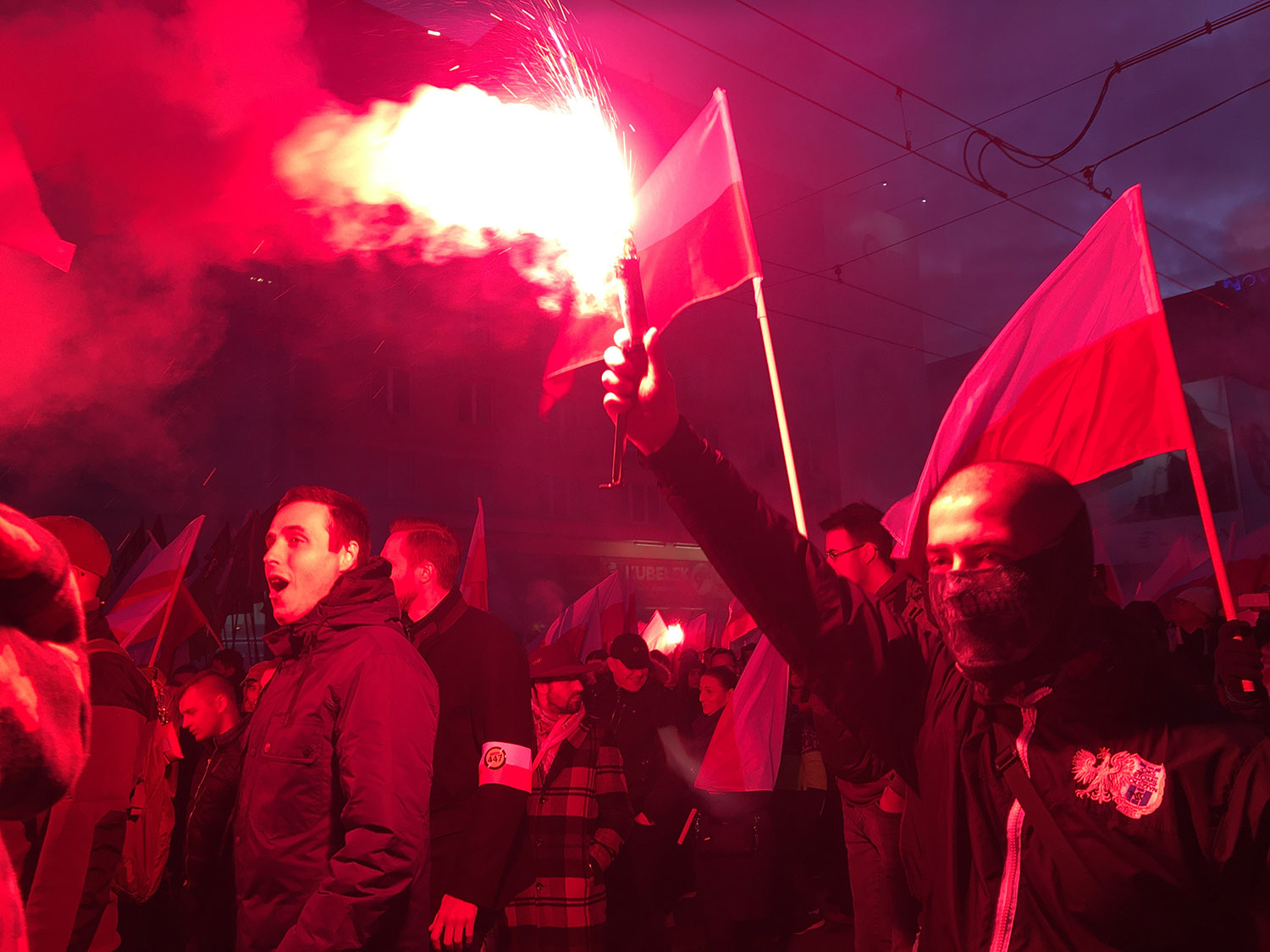 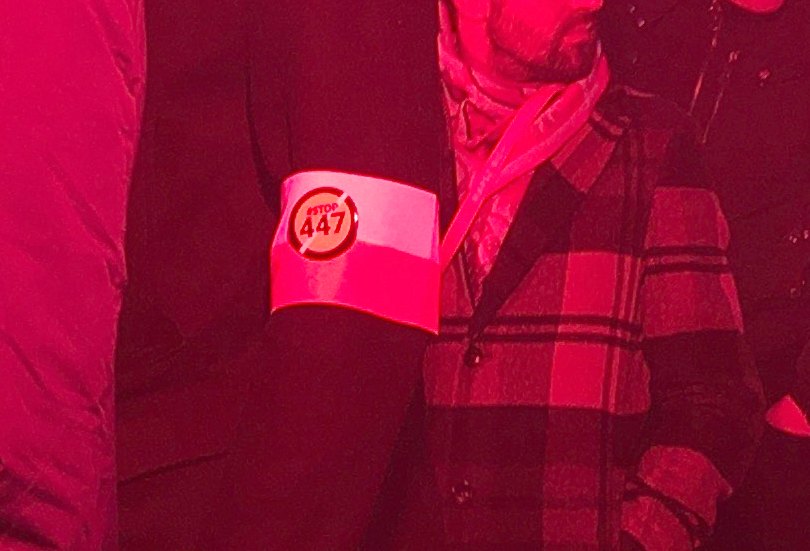 A closer look at an armband with the antisemitic “Stop 447” slogan. Pic credit: Dream Deferred

There were banners and symbols denouncing LGBT people along with luridly illustrated anti-abortion banners. 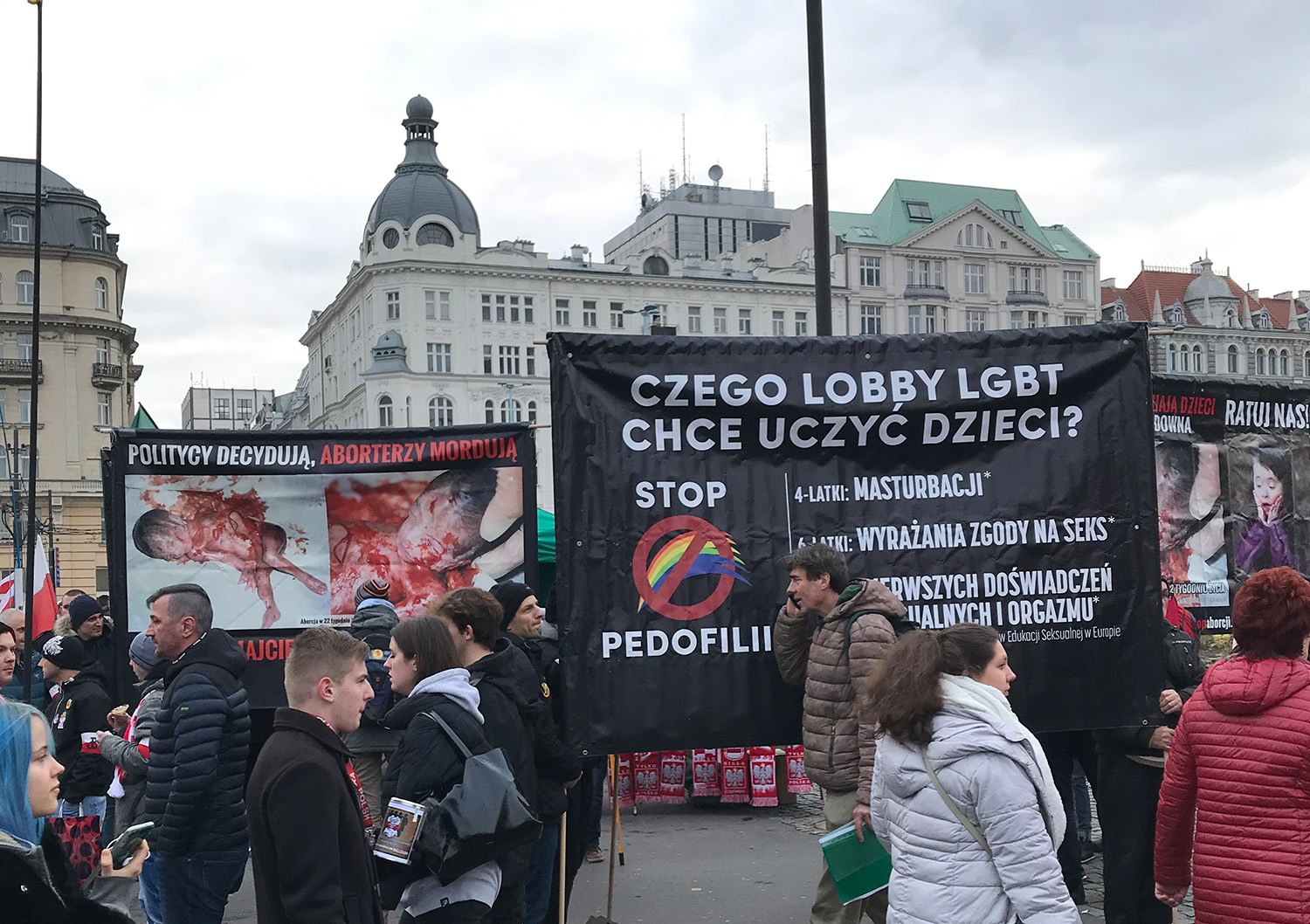 And, unlike previous Independence Day marches, the football hooligan firms that traditionally make up strong sections of the demo did not wear team colours or march behind club banners. Instead they wore Polish national football scarves, many with “White Power” Celtic cross symbols on them. The aim was to stop different team supporters fighting with each other, but the implementation showed the fascists are able to impose a measure of discipline on some of their most aggressive supporters.

The fascists are growing out of the general rise of the far right in Poland and feeding off the legitimisation of their politics by the PiS. But the shift of themes on the march is aimed at widening the base of support.

In a recent survey, Poles under 40 were asked to name the biggest threat facing the country. Among women, the most popular answer was the climate crisis, while among men it was “gender ideology” and the LGBT movement.

Second, the fascists are making a pitch for Poland’s conservative Catholic community by defending the family, and militantly opposing LGBT rights and abortion.

The antisemitism of the “Stop 447” campaign sounds a particularly grim historical echo, given the almost total devastation of Poland’s pre-war Jewish community in the Holocaust. It is deeply alarming that the fascists have been able to make this a popular street slogan and to push the PiS government on the issue.

The Warsaw protest has also become a key gathering spot for fascist and far right parties across Europe. 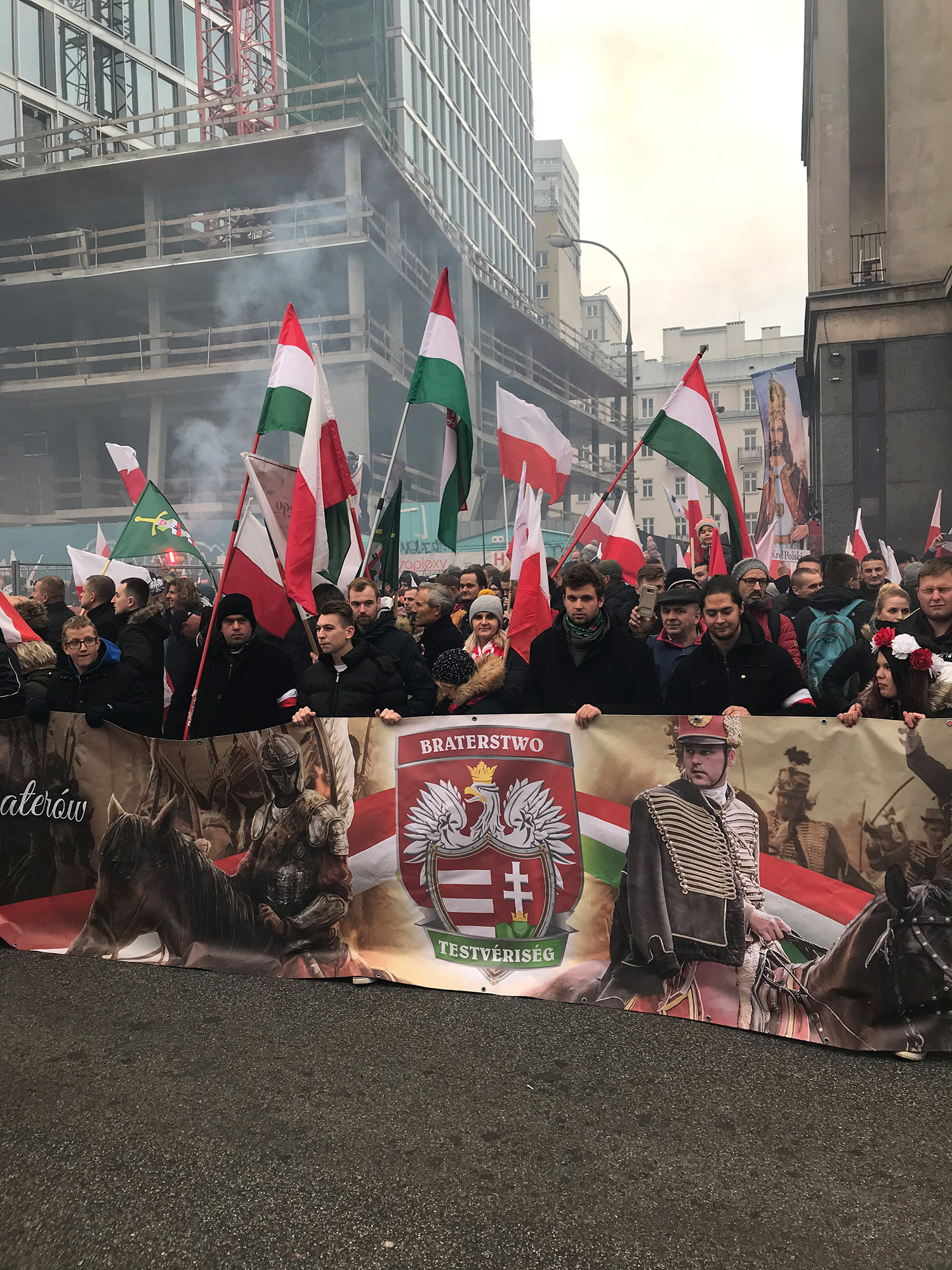 A Hungarian delegation joined the march, along with fascists and far right activists from elsewhere in Europe. Pic credit: Dream Deferred

There were delegations on the march from Slovak fascist groups, the Sweden Democrats, Italy’s Forza Nuova, Jobbik and the new Our Homeland Movement from Hungary. There was also an array of small nazi and ultranationalist groups from across Europe. These included a small group from the British National Party.

Ruch Narodowy also held a gathering for its members and supporters living outside Poland on the day before the march.

A more encouraging note was struck by the counter-protest staged by antifascists on the day. The Antifascist Coalition, which organised the loud and lively protest, said 15,000 turned out. This is significantly bigger than previous mobilisations and demonstrates a real desire to oppose the fascists taking to the streets.

A group of antifascist activists also succeeded in a superb banner-drop on the route of the fascist-led march. Painted across a Polish flag were LGBT, Roma, Jewish, Christian and Muslim symbols. 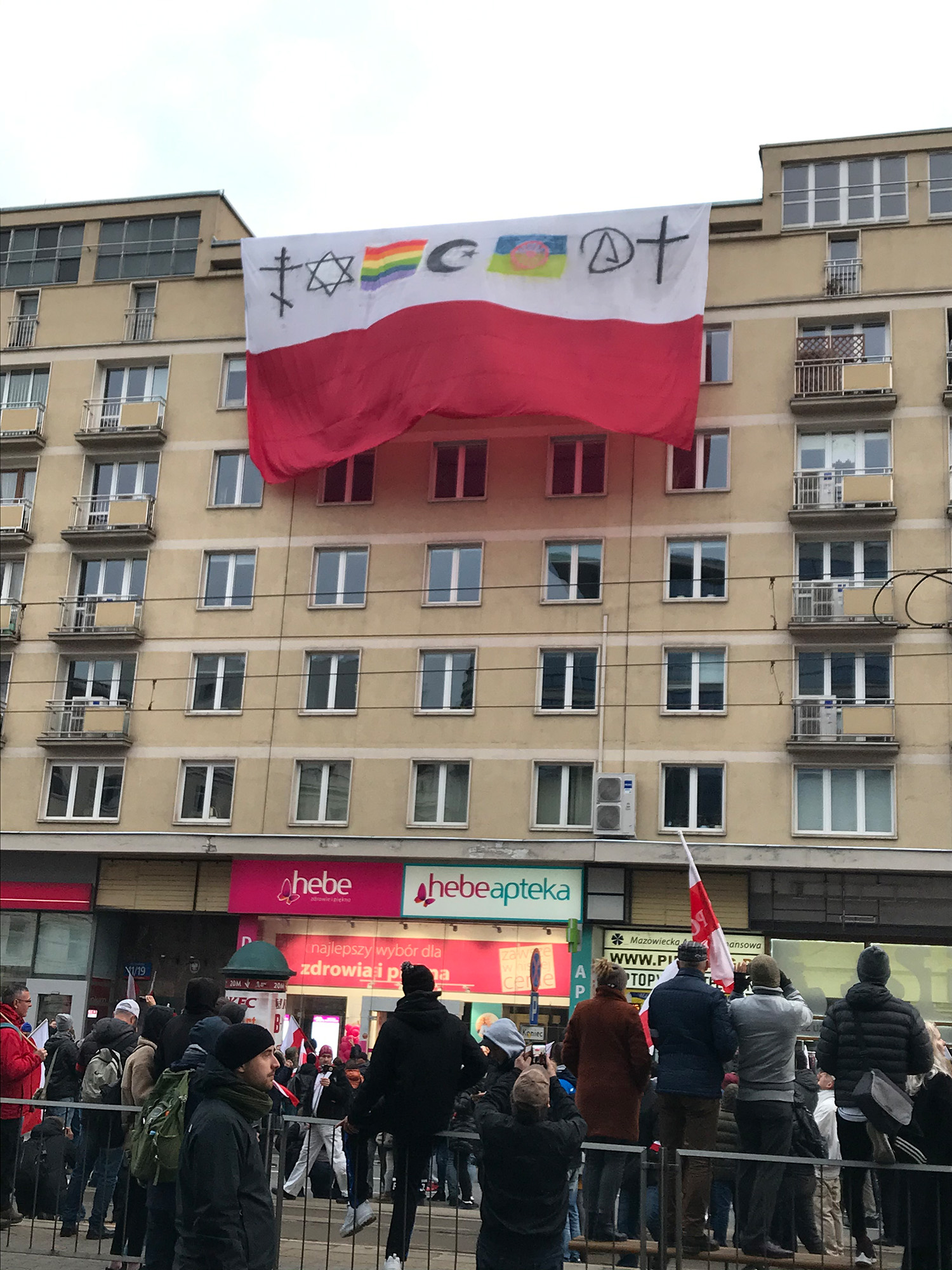 So shocked were the organisers, they halted the protest and sent a group of thugs onto the roof to cut it down. Only then did the march move on.

These antifascist initiatives are very welcome, but it is important not to underestimate the scale of the problem that antifascists face in Poland.

Last year we warned that although the fascist groups in Poland were relatively weak in electoral terms they were growing in size and, confidence and were being aided and legitimised by the increasingly rightward moves of the PiS.

One year on, with the far right PiS newly returned to government, the fascists of MW and the ONR have become a serious electoral force as well as one that can mobilise many tens of thousands on the streets. The danger is growing. 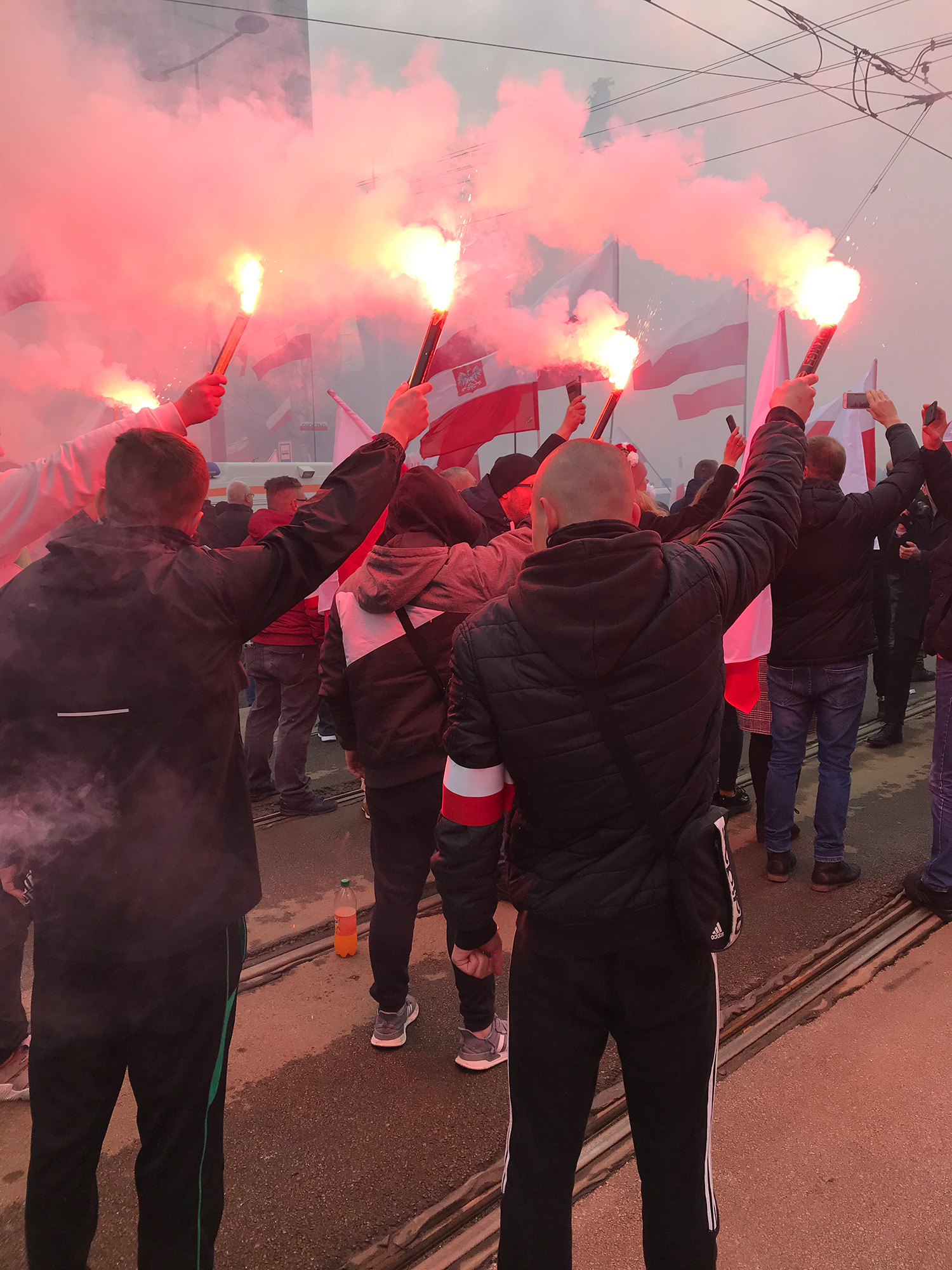